Estoniaâ€™s economy contracted at the fastest year on year rate in at least 15 years in the fourth quarterof 2008. Commenting on the news the Estonian Finance Ministry restricted himself to the obvious, “the recession may deepen this year”, he said. The economy shrank an annual 9.4 percent, the second-worst performance in the European Union (after Latvia), following a 3.5 percent year on year contraction in the third quarter. The contraction was 4.2% quarter over quarter. That is 16.8% annualised. Absolutely horrible.

â€œThis is the worst economic crisis in Estonia since Estonian independenceâ€ in 1991, Lars Christensen and Violeta Klyviene, analysts at Danske Bank A/S said in an e-mail today. â€œNobody can now deny that the crisis in the Baltic economies is at least as bad as the Asia crisis of 1997-1998 or the Argentinean crisis of 2001-2002.â€ 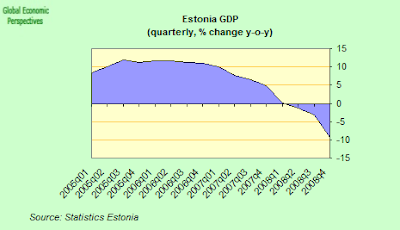