Well, the best thing that can be said about this is that it wasn’t as bad as the 18% contraction recorded in Latvia.

Estoniaâ€™s economy contracted the most in at least 15 years in the first quarter, making it the second-worst performance in the European Union. Behind the number lay a sharp fall in consumer spending and a plunge in industrial output. GDP was down by an annual 15.6 percent, the sharpest drop since at least the first quarter of 1994, according to the flash estimate from the statistics office. The fall follows a 9.7 percent drop in the last three months of last year. 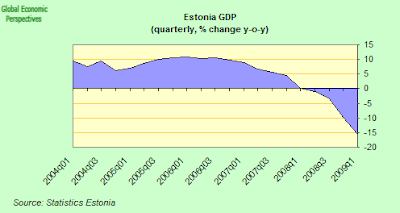 The 15.6% year on year was significantly above the consensus forecast for a drop of 12.8 % and even above more “realistic” forecasts like the Danskebank 14.6% guesstimate, and will obviously have implications for all sorts of things, but in particular for the government budget deficit forecast.

The latest round of GDP numbers from all three Baltic states – Lithuanian contracted by 12.6% and Latvian by 18% – all indicate extreme weakness in the respective economies.

Today’s number obviously lends support to the idea that Estonia’s economy might decline by more than 15% in 2009. A lot depends on what the next quarter looks like. If the slowdown accelerates the final annual number might be even worse.

According to the statistics office release, output was broadly down for the majority of economic activities, but the steepest decreases were in manufacturing, construction and the retail trade. Weak external demand added to lack of internal price competitiveness meant exports were a further drag on manufacturing performance. Industrial output fell by more 25% year on year in each of the first three months and retail sales have now been falling for 11 consecutive months. Exports plunged 29 percent in January and 25 percent in February.

The weakness of the GDP number means the budget situation will inevitably have deteriorated further, which means that if the deficit target of 3% of GDP is to be maintained the Estonian government will need to respond with even more painful cuts in spending. In general, the performance does not change the outlook for Estonia to fulfil the Maastricht criteria this year, but it does mean that sticking to the criteria is getting to be a harder task with every passing day.