According to a study out today by Capital Economics, East Europeâ€™s gross domestic product will shrink by 6 percent on average this year, with every single economy in the region posting a contraction.

The biggest declines (15 percent) will be in Latvia and Lithuania. Poland is forecast to contract by 3 percent. The Polish decline will be lead by a drop in industrial output that will help push the unemployment rate to close to 15 percent. Falling tax receipts will widen the fiscal gap to 5 percent of GDP, making the goal of euro adoption in 2012 unlikely.

Hungary and Romania, which is negotiating external aid, will both shrink by 7.5 percent. Turkey will also shrink 7.5 percent, while Ukraineâ€™s and Estoniaâ€™s output will decline by 10 percent. Bulgaria, expected to shrink 5 percent this year, is likely to follow its neighbor Romania in applying for an IMF loan as a collapse of exports and inward investment will shrink the money supply, forcing the government to drain its fiscal reserves to restore liquidity. Capital Economics argue Bulgaria’s reserves will only cover their needs for a further six to twelve months.

The plight of the region is summed up by the situation in the Czech Republic, widely regarded as one of the stronger economies. The Czech Republic could see its economy contract by as much as 2 per cent this year if the recession worsens in western Europe, Central Bank Governor Zdenek Tuma warned in an interview published in the Financial Times this morning. As recently as January the bank were forecasting an expansion of 2.9% for this year (in a post at the time, I was already forecasting a recession and zero per cent growth, and by mid February I was in the 2% contraction range, now I would be more pessimistic, and think we could see a contraction of between 4% and 5% ).

The driving force behind the contraction is the implosion of Czech industry, and it was announced today that industrial output fell the most in at least 16 years in January, the fourth successive month of contraction. Output was down 23.3 percent following a revised 12.8 percent slump in December. The drop was the highest since Czech Reublic came into existance in January 1993. 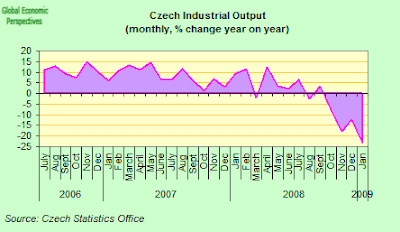 The slowdown in the euro region, which is the main market for Czech goods, is really hurting exports, and both the central bank and the Finance Ministry are cutting their 2009 forecasts.

â€œThe slump of industrial output confirms fears that the economy may contract 3 percent to 4 percent this year,â€ said Vojtech Benda, senior economist at ING Wholesale Banking in Prague, in a note to clients. â€œFor the central bank, it presents quite a clear argument for another lowering of interest rates, which could be outlined after the Thursday meeting.â€

The central bank, which has cut the benchmark repurchase rate to 1.75 percent, meets again this week Most analysts feel they will keep rates unchanged, but as we see above Vojtech Benda is not so sure, and looking at today’s data I am inclined to agree with him.

2 thoughts on “East Europe Forecasts Also Getting Revised Down”