With capital inflows to the CEE economies slowing to a trickle in Eastern Europe, a sharp correction is now underway in most countries’ external imbalances and in particular in their current-account deficits. For the CEE-6 (Poland, Czech Republic, Hungary, Romania, Bulgaria, Turkey), net private capital flows are forecast to slow to $59.5 billion in 2009, down from an estimated $161.9 billion in 2008, according to estimates from the Institute For International Finance. The basic concern is that those countries with significant external deficits are extremely vulnerable to foreign capital reversals, especially in the current environment of global credit tightening.

FDI flows (which are generally considered more stable and less susceptible to rapid outflows than other capital flows) have been the main form of financing for current-account deficits in recent years, but such inflows are set to slow sharply in 2009. The Economist estimates that between 2003 and 20007 FDI inflows (on average) covered almost 100% of the current-account deficit in the ten EU member states. In 2008, this coverage fell to an estimated 55%

As FDI has fallen back, debt – particularly intra-bank lending – has become the main financing vehicle for the current-account deficits. Nevertheless, intra-bank lending â€“ that is, lending between foreign parent banks and their subsidiaries in the region â€“ is falling back sharply in 2009, with nett bank lending to emerging Europe, excluding Russia, being projected at around $22 bn in 2009, down from $95 bn in 2008 (according to the Institute for International Finance)

Now the central issue is that such corrections in external imbalances can take pplace in one of two ways – either domestic demand drops sharply and/or the currencies weaken significantly. In the case of those countries with an exchange rate peg the second route is not open, hence what we are likely to see is a very sharp contraction. Such contractions are already evident in the Baltics, but what about Bulgaria. How sharp will the correction in Bulgaria be? Only today capital economics have come in with a forecast of 5% contraction over the year. But how realistic is this, let’s look at some data.

Well, we could start with this little deatil: retail sales down 25.7% month-on-month in January, according to the national statistics office. For an economy which has been driven by a consumer borrowing and lending boom, that looks like dramatic evidence of some kind. It looks like dramatic evidence, but it isn’t really quite so dramatic as it appears at first sight, and the first warning I would issue to anyone who wants to study the Bulgarian economy is never to believe anything you see at first sight.

The data came from a Bulgarian press source (see extract below), but they evidently had no idea what they were talking about, since they confused the basics of year on year and month on month, and obviously non seasonally adjusted sales are down massively January over December, every year. Actually according to Eurostat, seasonally corrected sales were down only 0.15% month on month, and were even still up 4.79% year on year, although this is still a very large drop from the 20% rate of increase registered earlier in the year. So the basic point would seem to hold, that Bulgaria’s economy is now in freefall, but I have learnt something: never, ever, cite material from direct Bulgarian sources without checking.

Retail sales revenue in Bulgaria declined by 25.7% in January from the same month of last year, the National Statistical Institute (wwwo.nsi.bg) said in a statement. The slump was attributed to a sharp decrease in retail sales of larger consumer goods, although a decline is normal for the beginning of each year. A major 31.5% drop was reported in sales of vehicles and technical maintenance. Revenue generated by non-food sales went up by 3.0% year-on-year, the data showed. Revenue from food, beverages and cigarettes sales showed a minor increase of 0.5% 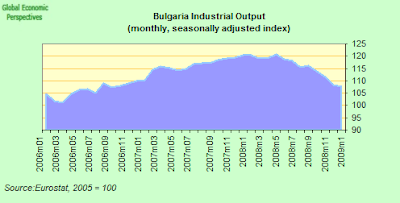 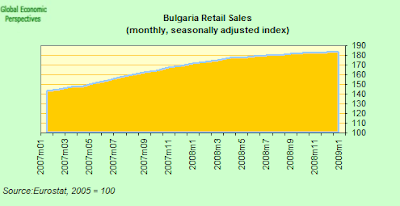 So there is evidence of a sharp slowdown in retail sales, but at present that is all it is, a slowdown. So what about the rest of the economy? Well, if we come to look at industrial output, the situation is a lot clearer, since production is falling rapidly.

Bulgaria’s industrial output fell by 19% in January 2009 month-on-month, after rising by a monthly 1.7% in December, preliminary data of the National Statistics Institute (NSI) showed on Tuesday. This is the fourth drop in a row, causing the index to go below the 2006 levels. The industrial output index is mainly determined by the indicators of the processing industry, which dropped by 21,4% in January, compared to December 2008. There is a 66,5% decrease in the production of metal goods, excluding machines and appliances. In the production of non-metal goods the drop is by 42,1%, and in the food processing industry by 24,8%. 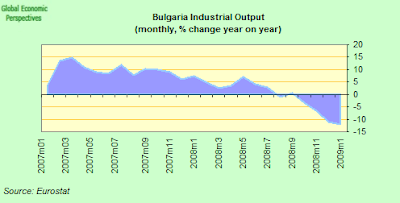 As can be seen in the chart below, the output index is now somewhere round the level of summer 2006, and falling. 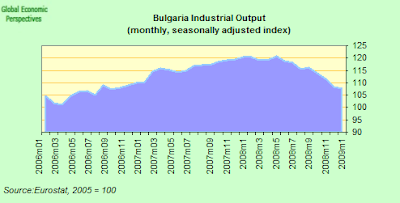 Construction is also falling, and has been slowing all through 2008. 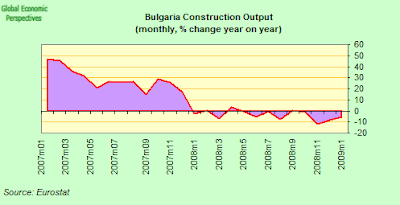 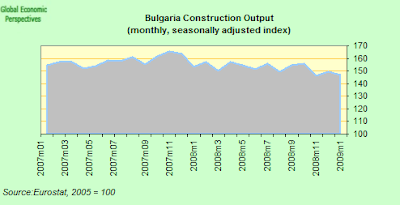 Unemployment Rising and GDP Slipping Back

Bulgaria’s unemployment rate has not spiked dramatically upward yet, but it is continuing to rise, and was up for the fifth consecutive month in a row in February, with 248,000 Bulgarians registering as unemployed, up by 7,000 over January. The average jobless rate for Bulgaria is now 6.69%, up by 0.9% since September.

And while Bulgaria’s gross domestic product still seems to be growing, it was at the very best a close shave in Q4 2008 grew, since the economy grew by a preliminary 3,5% year on year, down from the 6.8% rate registered in the previous quarter. This is sharp enough to mean that the economy may actally have contracted on a seasonally adjusted quarter on quarter basis, but since the statistics office don’t publish this level fo data we simply don’t know (that is, an educated guess would be that it did contract, but I certainly couldn’t swear to the fact). 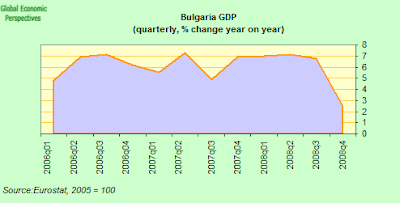 The current and capital account deficit was EUR 288.7 M in January compared to EUR 806.2 M recorded in the previous year.And January’s trade deficit was EUR 339.3 M, narrowing from EUR 607.8 million in 2008. All this is consistent with a very sharp and rapid contraction of the economy, as imports collapse and fund flows dry up, rather than any positive news on exports. Exports fell by 27.2% to EUR 811.8 billion in January, while imports dropped by 33.2% to EUR 1.1 billion. 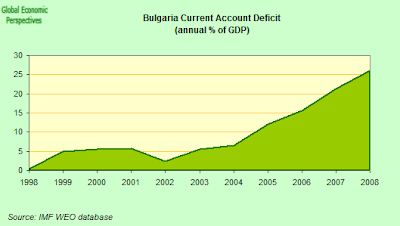 Bulgarian inflation slowed again in February for the eighth consecutive month and hit 6 percent – down from the 7.1 percent registered in January, but prices are still rising far too fast for an economy which is slowing rapidly. Consumer prices gained 0.1 percent in the month. 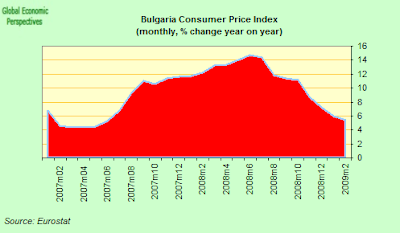 And the core index – taking out food, energy, alchohol and tobacco – has almost stopped rising but has yet to fall. So we have had a significant period of price deflation, but we have yet to see price reductions, and these of course, as in the case of the Baltics, are vital for a country operating a currency peg which has seen a substantial loss in competitiveness. 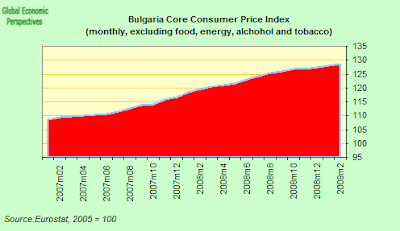 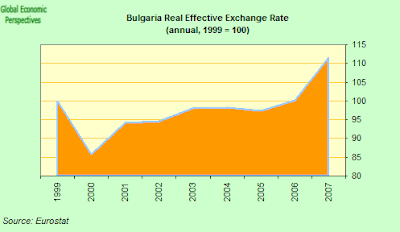 “Bulgaria is likely to experience a difficult recession in 2009 as the economy suffers from shrinking exports and slowing inflows of foreign capital,” Moody’s sovereign risk group analyst Kenneth Orchard said in a statement. “Nevertheless, many years of prudent fiscal policy and low debt mean that the government is well positioned to cope with the situation.”

Having averaged Budget surpluses of 2.7 per cent of gross domestic product (GDP) since 2004, the Cabinet has strengthened its financial position, but the main threat did not come from the Government debt, which was a very low 14 per cent of GDP. Moody’s argued Bulgaria’s most pressing problem comes from the large quantity of private sector debt that has been accumulated and needs refinancing in 2009. Short-term external debt totalled around 13 billion euro at the end of 2008, which is equivalent to 40 per cent of GDP. Much of this debt is likely to be rolled over, but automatic re-financing can no longer be assumed in the current financial environment. The low Government debt is seen as a safety net, because it allows Bulgaria (like Latvia) to borrow funds to support the private sector and the currency board without immediately threatening the government’s creditworthiness. The debt-to-GDP ratio could rise and still remain well below the EU average, according to Moody’s.

And as if to prove Moody’s point Bulgaria announced during the week that it was going to borrow a further 50 million euros from the European Bank for Reconstruction and Development in 2009 than it did in 2008, in order to cope with the impact of the global financial crisis. Half of the 250 million euros total 2009 borrowing will go to local banks to spur corporate borrowing, EBRD President Thomas Mirow said. The rest will go toward energy efficiency projects, municipalities and direct lending to â€œsound companies.â€

So, to return to the start of this post, and the correction in the external imbalance, I would say there is plenty of evidence building up now that this is taking place, and that the process is starting to hurt. In which case I think the 5% GDP contraction Capital Economics forecast not only looks realistic, there seems to be significant downside risk attached to it.

9 thoughts on “Do They Have Parachutes In Bulgaria? (Updated)”