Please think of this as a supplement and a slight challenge to Edâ€™s fine 23 May 2011 piece on Latvia. Besides giving us the most interesting (or weird? 🙂 ) title for a long while, he raises some very important questions: Is the Latvian internal devaluation really over and has it been successful? Ed is not convinced â€“ neither am I but I am not as pessimistic as he seems to be.

Allow me therefore to address some of the same issues but with somewhat different arguments and graphs.

If you have followed the PIIGS you are familiar with a graph like Figure 1. The familiar story is that by keeping a lid on wages Germany has gained, slowly but significantly, in cost competitiveness vis-Ã -vis the PIIGS where cost control was never that disciplined. 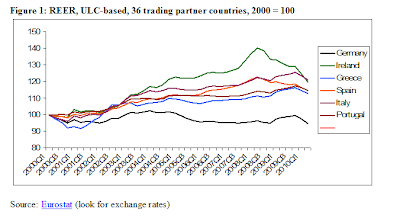 Given that the PIIGS have the euro and thus cannot devalue to raise their competitiveness they must do so via an â€˜internal devaluationâ€™, just as has been done in Latvia and much of the debate centres around whether these PIIGS countries really can do so.

Now look at the same graph but with Latvia included: 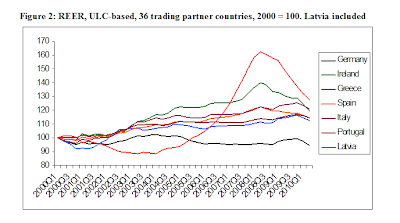 If the PIIGS lost competitiveness then Latvia must have done so on a grand scale (REER increasing almost a 100% from 2004-08).

There is no doubt that Latvia did lose competitiveness. A textbook example (link in Latvian only) of loss of competitiveness was the demise of Amber Furniture, one of Latviaâ€™s largest furniture companies in June 2007. 90+% of its production was for exports and given its type of business it was in serious competition with furniture makers elsewhere. Due to the massive wage increases at the time its ULC increased rapidly. Due to competition with other companies elsewhere where costs were not rising that much it was impossible for Amber Furniture to raise prices to compensate for higher costs. Costs up, prices flat ï‚® profits vanish, leading to bankruptcy.

But how much competitiveness was really lost? And although the â€˜internal devaluationâ€™ here has obviously recouped some of the competitiveness, is it enough?

Here I must at least partially disagree with Ed. Such loss of competitiveness should have had an impact on exports but that never really materialized

Take a look at Latvian exports in Figure 3. Exports kept rising through the â€˜fat yearsâ€™ (the Latvian name for the years of excesses, 2004-07) although competitiveness was constantly sliding. The decline in 2008-09 is a result of the world recession with lower demand from all countries and anyway came when REER started falling again. 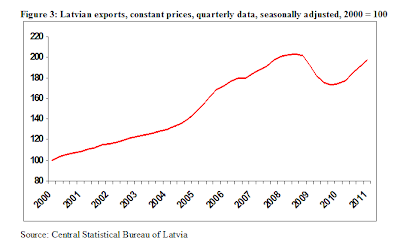 Or look at it differently. Figure 4 shows exports as a share of GDP. This was reasonably stable until 2004, then it increased until 2006 (I would consider that an effect of joining the EU), then it declined again, possibly due to a loss of competitiveness, but not to levels lower than pre-EU membership. And then it has been shooting up because it easily outperforms domestic demand right now; in fact it is the only thing creating positive growth in the economy at the moment. At more than 55% of GDP, exports have never had a higher share.

To me Figure 3 and 4 do not spell lack of competitiveness and/or an overvalued Latvian currency. 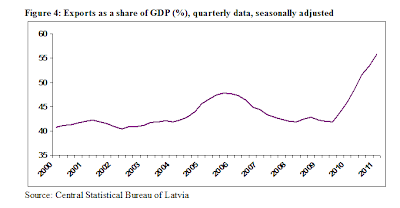 And that is perhaps exactly it. The lat may not be overvalued. True, competitiveness was lost on a grand scale 2004-08 but if the lat was undervalued in the early parts of this millennium, Latvia was simply moving from an undervalued exchange rate towards (sort of) equilibrium.

Why didnâ€™t exports soar if the lat was undervalued? My take on this is that exports were profitable but construction and real estate even more so. Both sectors expanded, helping the economy to grow, until there was no more labour available â€“ see Figure 5 â€“ remember, unemployment dipped as low as 5.3%, way below its equilibrium rate, which, according to whom you ask, is somewhere between 10% and 15%. 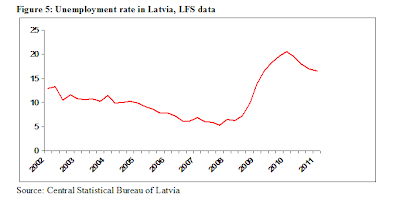 In short, looking at the data doesnâ€™t make it strikingly clear that Latvia had a serious competitiveness problem. The collapse in GDP was much more a result of a classical â€˜sudden stopâ€™ â€“ the Latvian economy was going through the EUâ€™s biggest demand boom, financed by cheap credit. When that stopped with the international financial crisis, the Latvian economy went into a tailspin.

At the end Iâ€™d like to raise some unresolved issues plus add a few comments:

â€¢ Would an external devaluation have shortened the length of the recession?
I donâ€™t think so â€“ the Latvian recession was very deep but not overly long, see my comparison with Iceland.

1 thought on “Did Latvia really lose that much competitiveness???”