Popular myth and, allegedly, the laws of aerodynamics have it that the bumblebee should not be able to take flight. Yet still, our good bumblebee refuses to be pulled down by such nit-picking details, and year after year it takes flight as if none of this mattered. This little allegory applies, adding a little imagination, to Japans economy too. Year after year it gives us the impression of simply being able to ramp up domestic debt to cover the evident shortfall in both domestic consumption andÂ  investment demand, since having a savvy export sector, and a strong net foreign asset position, mean that Japan does not have to rely on foreign investors to finance government debt outlays. Add to this a central bank definitively bogged downÂ  in what appears suspiciously like perpetual Quantitative EasingÂ  mode given the persistent deflation from which the country suffers and there we have the core of Japan’s “bumblebee moment”. 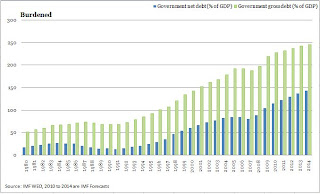 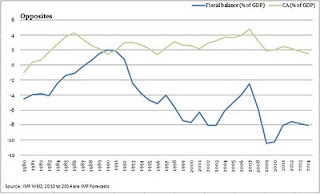 Recent comments and analysis have however begun to suggest that while the bumblebee could wellÂ  continue to maintain a semblance of defying gravity, Japan’s time just may well be up. In particular two pieces of research authored by Societe Generale’s Dylan Grice (see here and here) together withÂ  a recent piece by Kenneth Rogoff have added to pre-existing concerns that Japanese society may be headed off for a Greek party all of their own. In reality of course, the sudden focus on Japan is a direct function of the change in market discourse since end 2009 and the focus on government debt sustainability and how to rein in fiscal policy (if at all). Thus it is only logical to expect the great eye of the market to also turn to the biggest sovereign debtor in the world which just happens to be the oldest (demographically speaking) too.

In order not get confused here is Grice himself;

To recap, the thesis I outlined back in January 1 was that since Japanese households â€“ the biggest effective drivers of JGB demand â€“ are set to dis-save in coming years as they retire (left-hand chart below) there will soon be no one left to finance the governmentâ€™s nosebleed deficits at current yields. Indeed, the chart below suggests households are already running down assets. And because the interest rates which might attract international investors will inevitably blow up the budget (debt service is already 35% of government revenues at existing yields) there is a very clear and present danger that the government reverts to the well- established historical precedent for cash-strapped governments of currency debasement.

As you can see, the issues here are complex but intellectually they are hugely important since what happens in Japan may tell us a lot about what will happen in other ageing economies such as, most notably, Germany but essentially a whole host of OECD economies (and China) who are set to move in the same direction as Japan. In this sense, I should immediately admit that on an intellectual level I agree with almost everything Grice says and especially his focus on Japan and the nature and extent of dissaving.

But, and in order not to make this into a fan letter, I am going to quibble a little bit with Grice in what follows.

Firstly, and on a very specific point, the chart (in Grice’ last note) which shows how Japanese households are actually running down their assets does not fit with the picture I get from my data (BOJ). 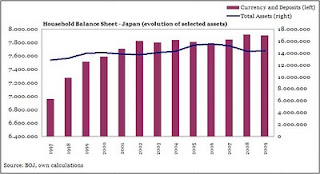 Now, I certainly don’t want to start the chart wars II here and obviously, there are many ways to define the stock of savings which might prove me as wrong as Grice is right (and vice versa). What is certain is that the incremental flow from household saving (if any) will not be enough to offset the incremental flow of bonds issued by the ministry of finance. This leaves the crucial role of corporate savings which is quite high in Japan and which also seems to be responsible for the Japan’s external surplus (on the trade balance at least).

Yet, in order not depart down the path of reinventing the wheel I will immediately refer to my most recent notes on Japan and this in particular in which I butt heads with the FT’s Martin Wolf on exactly the issue of (dis)saving in Japan and the distinction between corporate and private savings. Essentially then, this is a question of perspective and timing since I agree with all parties involved here on, at least, two accounts. Firstly, Japan government finances in an extraordinarily bad shape and the future ability of Japan to ever hone up to its liabilities is very, very slim. Secondly, dissaving is very likely to become a binding constraint in Japan at some point which would epitomized by how Japan would need to borrow from foreigners in order to finance an external deficit. In this case, and I agree with Grice here, it is game over.

But how we get from here to there may be just as important as what happens when we get there. In fact, yours truly have just defended his master’s thesis on exactly this topic and the overall conclusion, which fits quite well in the present discussion, is as follows;

Ageing societies are not, in the main characterised by aggregate dissaving but rather by the fight against it.

While my thesis councillor did indeed like the entire ouvre he was none to happy about this one. And can can you blame him? Isn’t it almost tautology? As I did on my day of graduation I will stand my ground and argue that it isn’t.

The crucial issue in my opinion is the change in perspective, from simply sitting back and waiting for the inevitable pop in Japan, Germany etc to starting to examine the main economic characteristics of an elderly economy (such as can be found in Japan, Germany [1] and will be seen in many, more who are yet to come). In a nutshell, such characteristics sum up to a deeply export dependent economy which exactly manages to keep the boat afloat because of higher domestic savings than required to dervice domestic investment demand, thus implying an enduring external surplus. Naturally, and as a very important aside, Japan also has its own central bank who has been administering QE in one form or another for the better part of two decades now, a feauture serves to allow government debt to grow without Japan needing to attract foreign funds.

This perspective provides us with two very important pieces of insight I think. One is that a rapidly ageing economy will not be able to revert to a growth path characterised by external borrowing and thus a net contribution to the unwinding of global imbalances. The second is that the global process of ageing becomes an externality to the whole global macroeconomic system because it puts more and more economies in a situation where they need to maintain external surpluses in order to prevent the forces of dissaving or, more accurately, the slump in internal demand as ageing pushes up the dependency ratio.

Now, think about the discourse we are having exactly at this point in time. It is a perfect mirror on the two points above with the added spice, in the context of the Eurozone, of how economies embarking on internal devaluation are also forced to find growth based on external demand because whatever growth they were able to generate from domestic activities in the first place are now being effectively choked off.

Moving back into the real world, Grice believes that Japan’s time may just be up and he specifically points to the fact that Japan needs to roll over 213 trillion while at the same time, the biggest holder of Japanese government bonds has openly announced that it has no inflows with which to suck up extra JGB supply.

I honestly don’t know whether he is right. He may be and if so, Japan will stand as a poster example of just how an ageing economy can take it before it folds in on itself in the sense of trying to maintain a modern market economy that is. However, I am inclined to call him on his bet and in this sense I am much closer to Buttonwood’s take on the situation;

(…) the huge amount of Japanese debt rolling over this year need not be a problem. Investors will simply recycle their existing holdings. Takahira Ogawa, a sovereign analyst at Standard & Poorâ€™s, thinks there is more scope for the Bank of Japan to buy government debt, as central banks have done elsewhere.

Of course, such measures just postpone the evil day. The crisis will surely arise when Japan becomes dependent on foreigners for finance, or if a sharp rise in inflation or a sudden slump in the currency causes domestic private investors to take fright. But since the country is still running a current-account surplus, the yen is trading at 90 to the dollar (compared with 124 in June 2007) and deflation is forecast for the rest of the year, the apocalypse seems unlikely to occur in 2010.

Thus I would point to the continuing surplus in the corporate sector, the fact that households are not yet drawing down their deposit base, and most importantly; the fact that the BOJ has every right and reason to continue keeping the QE taps open as long as deflation is running at +2% on an annual basis. In fact, here is one of the other feedback loops from ageing right here; namely that as domestic demand simply spirals downwards, the economy gets caught in a deflationary trap (the liquidity trap in monetary policy circles) which only serves to push up domestic government debt thus forcing the central bank’s hand on QE and making it even a larger imperative to maintain an external surplus.

However, before I myself try to emulate the bumblebee by defying gravity with another complex argument, I think I will hold off with this one for another day.

[1] – See this excellent piece by Edward which exactly touches on a similar issue in the context of Germany.

2 thoughts on “Defying Gravity In Japan”