Well, I don’t know how many other people have noticed, but the Hungarian forint has been having rather a hard time of it over the past few days. The currency was down by as much 1.3 percent against the euro at one point today, today making the two-day intraday loss 3.6 percent, and this according to Bloomberg, was the biggest such fall since March last year. The Polish zloty also has weakend slightly, and fell by 0.1 percent to 3.9333 against the euro today while the Czech koruna gained 0.1 percent to 25.582 against the euro. At the same time the cost of credit default swaps on Hungarian debt rose 23.5 basis points to 240. Now virtually all currencies associated with the euro have been having a hard time of it in recent days, but what matters is the magnitude of the pressure being felt in each case, and Hungary here has been unlucky enough to have entered a period of political uncertainty at just the time when the level of market nervousness is higher than normal. There is another problem too. Over 85% of Hungarian home mortgages are not in forints, they are not even in euros, they are in Swiss francs, and the CHF has risen sharply against the euro since the start of the year. So unfortunately Hungarians don’t even benefit from the euros woes. 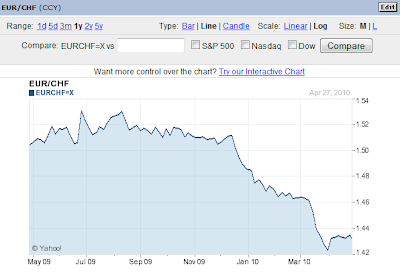 Really, and unfortunately, this is the one I had been waiting for, and expecting. And precisely why did has the forint tanked in this way? What is so special about Hungary? After all, aren’t many of Europe’s economies seeing the cost of financing their government debt rising sharply over recent days. Basically one of the key reasons the forint has taken such a sharp knock is that Viktor Orban, Hungaryâ€™s new premier-in-waiting, just said in public what everyone following Hungary has been thinking (and saying) for weeks now: Hungary’s fiscal deficit is going to be higher (possibly significantly higher) than the target agreed with the IMF. Other factors have also added to the level of concern about the country. What exactly will the core orientation of the incoming government economic policy be, and how much political interference might there be in the financial and monetary institutional structure? Certainly things haven’t been helped by the way Hungary’s incoming Prime Minister has publicly criticised the financial markets regulator (PSZÃF) and even gone so far as to give the impression he would like to replace central bank (National Bank of Hungary – NBH) governor Andras Simor (see Portfolio Hungary account here). In a world like the one we live in right now, what you ask for is what you get, and so get it they did. 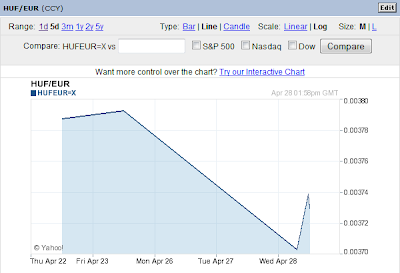 The Hungarian forint dropped sharply on Tuesday – says the Financial Times – as comments from the countryâ€™s premier-in-waiting raised worries over its fiscal position. The forint and Hungarian stocks rose sharply on Monday as news that the Fidesz party had swept to a landslide victory in Hungaryâ€™s general election at the weekend reduced political uncertainty and buoyed local markets. Lars Christensen at Danske Bank said the remarks only confirmed his view that the positive reaction on the Hungarian markets to Fideszâ€™s win was overdone. â€œFideszâ€™s victory will lead to a loosening of fiscal policy, which is rather more negative than positive for Hungary,â€ he said. By midday in New York, the forint was down 3.7 per cent at Ft203.65 against the dollar and lost 2.3 per cent to Ft269.17 against the euro.

As I say, this is what I had feared would happen. It has been obvious for some time now that the true extent of the fiscal position in Hungary was not being made public – especially off-balance sheet debt in public corporations, and in Public Private Participation projects. Of course, the incoming government, like its Greek counterpart before it, wants to “come clean” so as not to take what it would consider to be unmerited blame. But that isn’t how markets will see it, since they will simply push up the country risk element given that fiscal spending has been – in theory – being brought under control since as far back 2006. That is to say, and this is an issue we will have to face in a number of the countries in the East, the IMF programmes simply are not working as they should, or giving the anticipated and hoped for results. I have written about all of this on numerous occasions on my Hungary blog, most notably and most recently in my post of January 21 Hungary Isn’t Another Greece……..Now Is It? – which was treated sufficently seriously to receive a direct reply from the then Minister of Finance, Peter Oszko.

In recent weeks I have refrained from replying to the Minister’s reply since I did not want to politicise my discourse in the context of the recent elections. But now they are over, and Hungary faces a complicated mess. The economy is stagnant, and unemployment is going steadily onwards and upwards. So there is no sign at present that the “cure” has made the patient better.

Hungaryâ€™s rate of unemployment ticked further up to a record high of 11.8% in the first quarter of 2010 from 11.4% in the previous three-month period, the Central Statistics Office (KSH) reported on Wednesday. The rate of employment has also continued to drop and reached a 12-year low.

But the worst part of this situation is that contagion is now moving Eastwards, meaning that EU institutions will now increasingly face a battle on two fronts – this won’t stop with Hungary, there is Latvia, Bulgaria and Romania to also think about (just to name the first three that come to mind). This is what I was getting at when I wrote my “There Is Another Shoe To Drop In The Global Economic and Financial Crisis – And The Focus Will Be On Europeâ€™s Perifery” post back in September of last year. Time has elapsed, and inaction, denial and even incompetence at the highest level means that what was then only a possibility is now increasingly becoming a reality. And this on a day when Spain lost it’s first full “A” from Poor Standards – one down, two to go. As Felix Salmon so aptly puts it:

I covered emerging market sovereign bonds for many years, but Iâ€™ve never seen anything like this: a country trading at levels where the bear case is terrifying, the bull case is very hard to articulate, and everybody is talking about a possible default even when the country has an investment-grade credit rating from two agencies and is only one notch below investment grade at the third. Maybe the only thing which really explains whatâ€™s going on is that both yields and ratings are sticky. Which would imply that Greece has a long way to deteriorate from here.

This is no longer a rout, it is fast becoming a debacle. As Lennie Bruce once told Bob Dylan in a brief but eventful raxi ride, “in comedy everything is to do with timing”. Right now I haven’t the time to go that deeply into the details on Hungary, but my friend and collaborator Mark Pittaway – who sure as hell knows a lot about Hungary – just wrote a piece for me for a new website I am working on. So here it comes, being wheeled on stage just when the need arises.

The Comeback of a Political Survivor

The outright victory of Viktor OrbÃ¡nâ€™s FIDESZ party in the first round of Hungaryâ€™s parliamentary elections on 11 April, and the likelihood that they will win a two-thirds majority in parliament after the second round on 25 April marks a new stage in the unfolding of Hungaryâ€™s entangled political and economic crises â€“ crises that have been in process since the summer of 2006. Most discussion of the election outside Hungary has focussed on the 16.67 percent won by the neo-fascist Jobbik party, with its explicit racist rhetoric towards Hungaryâ€™s Roma, its open anti-Semitism and its uniformed paramilitary wing, the Hungarian Guard. Within the country attention has focussed, especially among FIDESZâ€™s defeated left-liberal opponents, on the probability that FIDESZ will use its new found power and influence to purge the public sector and the media of its opponents, waging an intensified version of the â€œculture warâ€ it conducted against the liberal left when it was last in power between 1998 and 2002.

Viktor OrbÃ¡n himself ranks among Europeâ€™s most persistent political survivors. In 2002 he was narrowly defeated by a coalition of Socialists and the liberal Alliance of Free Democrats in an election he was widely expected to win that took place in a benign economic climate. This defeat was largely self-inflicted and a product of FIDESZâ€™s authoritarian and confrontational policies towards its opponents.A further and larger defeat in 2006 seemed to confirm the outcome of 2002 â€“ that OrbÃ¡nâ€™s divisive style and widespread suspicion of his authoritarianism and use of right-wing populism would keep FIDESZ out of power for a long period. In the light of this, OrbÃ¡nâ€™s political survival and return to power are worthy of explanation.

You can read the rest of this in-depth economic and political analysis of what is going on in Hungary before our very eyes over at the Global Economic Spectator site.