Chinaâ€™s National Bureau of Statistics released fourth quarter GDP growth statistics for 2008 today, and it turns out that (according to their initial estimates) the Chinese economy expanded by 6.8 per cent in the last quarter of the year when compared with the same period in 2007. This was the weakest quarterly year on year growth rate in seven years. For the year as a whole, the economy grew 9 per cent, down from the revised 13 per cent growth rate in 2007. 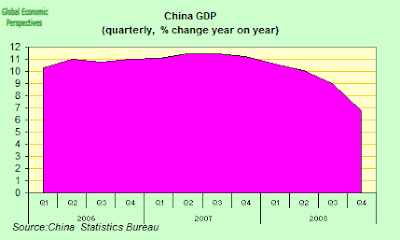 Strikingly, Japanese exports to the US were down some 37% yoy, losing some 26pp since the 11% yoy contraction in July. But we cannot highlight strongly enough how truly mindboggling Japanâ€™s collapse in exports to China are. Last July they were expanding at a 16% yoy pace. Now they are contracting at a 35% yoy rate! This is a phenomenon throughout the region. Hence despite the notoriously manipulated Chinese GDP data showing a shocking slowdown in GDP growth to 6.8% yoy, I would eat my hat if the Chinese economy was doing anything other than contracting right now.
Albert Edwards Societe Generale

The steepness of this slowdown is likely to have a significant impact on much of the rest of Asia, which relies heavily on demand from China. Only this week a Singapore based economist friend of mine sent me this in an e-mail:

At S’pore’s port container terminal (the busiest in the world), a third of the cranes are idle. There are some companies saying they have inventories stretching 6 months out. December’s plunge in Asian exports was due to the shutdown of electronic companies during the Christmas period because of the pile up in inventories.

Basically there is still far too much we don’t know about what is happening in China, like, for example, the seasonally adjusted quarter on quarter rate. Barclays Capital economist Peng Wensheng estimates that after taking into account seasonal adjustments, the Chinese economy barely grew at all in the fourth quarter compared with the third quarter. My feeling is that he is most probably right. Most of the consenus analysts are therefore very probably well behind the curve. Like Daiwa Institute of Research, JPMorgan Chase & Co. and Citigroup Inc. who while they all today reduced their estimates for Chinaâ€™s growth in 2009 remained at remarkably high levels. Daiwa cut to 6.3 percent from 7.5 percent; JPMorgan to 7.2 percent from 7.8 percent; and Citigroup to 7.6 percent from 8.2 percent. This seems to me to be the next best thing to living in “cloud cuckoo land”.

One analyst at least seems to be getting it right. Guess who? Yep, you’ve got it, Doctor Doom himself.

The Chinese came out today with their 6.8% estimate of Q4 2008 growth. China publishes its quarterly GDP figure on a year over year basis, differently from the U.S. and most other countries that publish their GDP growth figure on a quarter on quarter annualized seasonally adjusted (SAAR) basis.

When growth is slowing down sharply the Chinese way to measure GDP is highly misleading as quarter on quarter growth may be negative while the year over year figure is positive and high because of the momentum of the previous quartersâ€™ positive growth. Indeed if one were to convert the 6.8% y-o-y figure in the more standard quarter over quarter annualized figure Chinese growth in Q4 would be close to zero if not negative.

Other data confirm that China was in a borderline recession in Q4 and that it may be in an outright recession in Q1: production of electricity plunged 7.9% in y-o-y basis; the Chinese PMI has been below 50 and close to 40 for five months now. And with manufacturing being about 40% of GDP , manufacturing is certainly in a sharp recession (negative growth) and the overall economy may be close to a recession So the 6.8% growth was actually a 0% growth â€“ or possibly negative growth â€“ in Q4; and the Q1 figures look even worse. So China is in a recession regardless of what the highly massaged official numbers claim.
Nouriel Roubini Blog This Morning

Basically it seems to me that few people other than professional macro economists and bank analysts (and far from all of these if the truth be told) really realise what the implications of such a dramatic decline in year on year GDP actually means. If the quarter on quarter rate of expansion was very low indeed, possibly verging on the negative then – guessing a bit, you know what they call back of the envelope stuff – this means output must have been moving in the October-December period somewhere in an annualised 0 to 2% range. This means we may well see quarter on quarter negative growth in 2009 in China, and that the possibility of a technical recession of two consecutive quarters of negative growth must be over 50% at this point. It wasn’t so long ago that the consensus was saying that annual GDP growth which was as high as 6% would be tantamount to a recession!

It is really very frustrating to find that with all the trillions of dollars at issue, and a whole army of China watchers, virtually no one seems to be trying to derive monthly and quarterly rates of movement from the official statistics.

The OECD do at least seem to be aware of this problem and they do have a lead indicator for China (which includes items like cargo handled at ports, Enterprise deposits, Chemical fertilizer production, Non ferrous metal production, a Monetary aggregate M2, and Imports from Asia. Below I have a chart which compares this indicator for both Spain and China. Since Spain, as we know, is having a very strong contraction at this moment in time, it gives some sort of reference point. What is so striking is that it appears China is now slowing much more rapidly than even Spain, and GDP may, looking at the steepness of the recent month on month drops,have even started contracting in November. This is obviously all shell shock stuff. 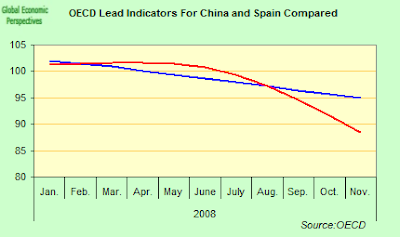 Societe Generale economist Albert Edwards is one of those who has been drawing our attention to the rapid decline in China’s GDP (although I myself had a go here) and he uses one very interesting “proxy” (an indicator which can serve as a rough and ready substitute for something else, in this case movement in GDP) – electricity output. If you look at the 3 month year-on-year moving average for electricity output in China (see chart below) you will see it is already falling, which means that (in all probability) China’s GDP is falling, which is just wow! 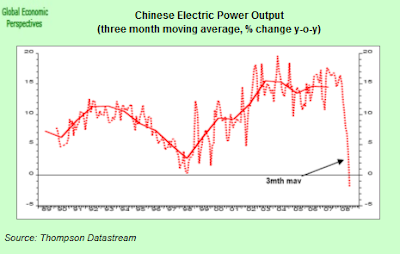 The history of using electrical output as a convenient proxy where we simply don’t have very adequate data has a long and reputable history – going back to the pioneering work of US growth theorist Edward Dennison in the 1960s – but in case you feel that the correlation may not be a good one, here (see below) is a chart from Edwards which shows China GDP and electricity output compared. The fit is obviously not a perfect one, but that isn’t the name of the game here, what should be evident is that a drop in electrical output as large as the one we are seeing in China at this point will be reflected in a very sharp reduction in GDP output. 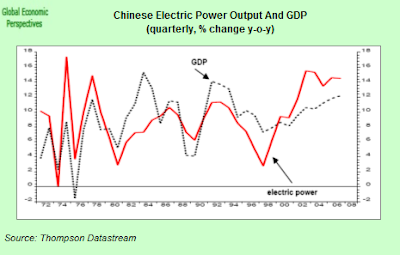 Which takes me on to my next point, how reliable is Chinese data? Well, perhaps I am going to surprise some of you here, but I would day that for my purposes it doesn’t really matter, since what I think we need to know is the rate of contraction (or expansion) in Chinese GDP, and not its absolute level. What matters to the rest of the world is not expecially how rich – or poor – China actually is (from a macro economic analysis point of view that is), but how rapidly it is expanding – or contracting – and what the rate of export and reserves growth is. The rest is interesting, but from a nuts and bolts point of view, it constitutes what Boris Vian used to call froth on the daydream. If the official data is rather inaccurate, then it is not unreasonable to assume that the inbuilt biases are the same from one time period to the next (the same point applies to the existence of the so called “informal economy”), and so my message here is – arrived at on the basis of looking at one economy after another in rapid succession – how much we can learn from how little, if only we know what we are looking for that is. This electrical output picture is also to some extent confirmed by China’s manufacturing purchasing managers index, which has been contracting for some months now, and to an extent which begins to be compatible with GDP contraction, given the dependence of China on manufacturing activity. 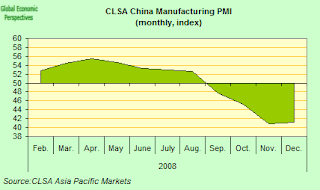 Well China isn’t quite in Great Depression mode yet, but manufacturing activity – which forms the core of the Chinese economy and accounts for 43% of all activity – is already very close to a technical recession, and phew, it wasn’t very long ago that the Chinese economy was registering double digit growth. So the turn around is gigantic. The “close to technical recession in manufacturing industry” call comes from the people over at CLSA Asia-Pacific Markets, who compile the China purchasing managers index, and they base their judgement on the fact that their Chinese manufacturing index has now been registering contraction for five consecutive months.

China is an export driven economy, and you can’t simply switch from external to internal demand as a driver at the click of a finger (or mouse, if you make your financial transactions online). Another economist who mailed me this morning said this:

“I don’t cover China so unfortunately, my views on that country are not very informed, but I do agree with your point about the China internal consumption argument. In my opinion, the belief that domestic consumption will take over from exports as a growth engine is nothing more than myth. Perhaps I’m misunderstanding the argument, but when factories and the export sector, in general, are bleeding jobs, it would be rather odd for internal consumption to take off at this point in time.”

So what is happening to exports? Well, Chinaâ€™s exports fell the most in nearly a decade in December, with shipments down by 2.8 percent over December 2007. That compares with a 21.7 percent increase a year earlier. Over the whole of 2008 exports were up by 17.2 percent, a reduction on the 25.7 percent gain registered in 2007, and suggesting that the drop in the last two months of the year may have been very sharp indeed. Exports to the European Union, Chinaâ€™s biggest export market, fell 3.5 percent in December from a year earlier. Shipments to the U.S. dropped 4.1 percent. Imports dropped even more sharply – by 21.3 percent, meaning the trade surplus failed to fall, and at $39 billion it remained the second-biggest on record.

And China’s declining imports are also being felt elsewhere, since in Japan’s December trade report (which was out this morning, and was a complete horror story) we find that exports to China were down 35.5 percent year on year.

So to some up, while it may well be true that China is not (yet) entering the Second Great Depression, I am arguing that China is really going to be one of the worst case scenarios in the current global recession, and that consensus thinking still has a very very long way to go in catching up with events in the China case.