Earlier this week Brad Setser was opining on his blog:

â€œLike everyone else, I am curious to see what Chinaâ€™s May trade data tells us. If China truly is going to lead the global recovery, China needs to import more â€“ and not just import more commodities for its (growing) strategic stockpiles.â€

Well Brad need restrain his curiosity no longer, since just this very morning we have learnt that:

Chinaâ€™s exports fell by a record in May as the global recession cut demand for goods produced by the worldâ€™s third-largest economy. Overseas sales dropped 26.4 percent in May from a year earlier. That compares with the median estimate for a decline of 23 percent in a Bloomberg News survey of 15 economists, and a 22.6 percent contraction in April. 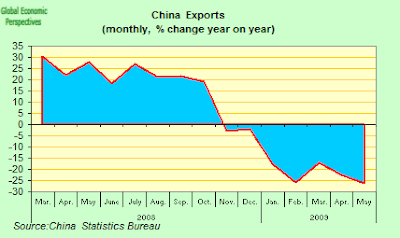 The decline was the biggest since Bloomberg data began in 1995. And more to the point as far as Brad is concerned Chinaâ€™s imports dropped 25.2 percent last month, compared with a 23 percent fall in April. Hence China just one more time ran an increased trade surplus (up to $13.4bn in May from $13.1bn in April), and it is no clearer to me than it is to Brad how a country running a trade surplus can be leading a surge in global demand. Indeed this months data, far from prodiving evidence of an accelerating “recovery” continues to point towards ongoing weakness in global demand, just like the evidence we are receiving from Germany, and from Japan.

Of course, these are year on year numbers. Month on month, exports seem to have stabilised since the start of the year, while imports are undoubtedly up. As Danske Bank put it in a research note today:

This is confirmed by the continued strong growth in Chinaâ€™s imports. According to our own seasonally adjusted figures, Chinaâ€™s imports soared ahead 5.8% m/m in May following an 4.9% m/m impressive jump in imports in the previous month. Chinaâ€™s imports of commodities such as iron ore, coal and crude oil have been extraordinarily strong, increasing speculation that China is currently building strategic inventories of the most important commodities (see chart on next page). For that reason, Latin America (not least Brazil) and the ASEAN countries have benefited recently from Chinaâ€™s strong import volumes.

What matters is not so much the fact that imports are rising, but what exactly the imports are. There is substantial evidence accumulating that – as Brad suggests – China is simply stockpiling commodities as a hedge against future inflation. Some of the best evidence for this came here, yesterday. If this picture is correct, then the situation is unsustainable, as is the run up in commodity prices and stocks which have accompanied it. I note Forex Blog draws similar conclusions this morning:

I would argue that the sustainability of this rally (both in stocks and in currencies) hinges on a return to GDP growth in emerging markets. [The IMF forecasts 1.6% growth in 2009 and 4% in 2010]. But given the gap between share prices and earnings, Iâ€™m frankly not convinced that investors actually care about whether the rally is supported by actual data. Instead, investors have complacently been swept up by the same herd mentality that produced the bubble of 2008, and could potentially lead to a rapid and painful collapse in what looks to be the bubble of 2009.

On the other hand there was a 38.7 percent year on year rise in fixed asset investment in May. This was an even larger increase than the one registered in April, when FAI rose 33.9 per cent. For the first five months of this year, investments increased 32.9 per cent from the same period in 2008, compared with 30.5 per cent in the first four months of the year and against an estimate of 31 per cent. According to Alaistair Chan, at Moodyâ€™s Economy.com.

Quite. And as a Chinese economist friend wrote me to say: “just how much of the current property demand is speculative? I also have my doubts whether even official inventory levels accurately reflect all the inventory out there, especially when I read anecdotes like this … ”

As a Beijing homeowner myself, Iâ€™ve experienced this puzzling phenomenon firsthand. We have been told that the value of the condo we bought last year has gone up 30% based on sales of new nearby developments, but itâ€™s impossible to confirm since there is no secondary market. Originally we tried to rent the place, but we couldnâ€™t find takers at any price that could remotely cover the mortgage, despite a prime location. When we decided to move in instead, we discovered that while the building was sold out long ago, hardly anyone actually lives there. Same with another 800-unit project down the street: every unit went for top dollar well before completion, but now the lights are off and nobodyâ€™s home.

In fact the volume of empty apartments across the country hit 91million sq metres at the end of last year, up 32.3 per cent from a year earlier, according to official figures. But those numbers included neither the huge volumes of completed real estate projects whose owners are waiting for market conditions to improve before they put them on the market, nor the estimated 587 million sq m of apartments sold in the past five years but left empty by their owners.

And that part of fixed investment which is ending up, not in flats for inventory, but in productive capacity. Well, as MacroMan says this morning:

But as capex growth keeps humming along..(we could ask)..does the world really need more manufacturing capacity at this juncture? …..(it all)…of course, begs the question of who the Chinese plan on selling to. It’s all well and good continuing to build factories and export capacity, but the real world isn’t like Field of Dreams; just because you build it doesn’t mean that customers will come. Yesterday’s US trade figures were telling in that regard. Imports declined again in April; while an inveterate “second derivative” believer may find reasons for optimism in the slight lessening of the pace of import decline in yesterday’s data, Macro Man is rather more sceptical. And the fact that US exports declined as well suggests that domestic demand in the rest of the world remains flaccid at best.

So, and finishing up where I started, with the trade balance, as Brad said: “China needs to import more â€“ and not just import more commodities for its (growing) strategic stockpiles”. However, to quote again my Chinese economist friend: Macroman’s data on China’s imports of commodities is surreal too. To which Claus Vistesen responded: “Yep, this was what I thought, and we should expect Brad Setser to be all over this”. We certainly should, we certainly should. On you go Brad.

8 thoughts on “Brad Setser Need Be Curious No Longer”