There is a good deal of speculation in the press at the moment over the tricky issue of whether or not Poland will be able to comply with its agreed deficit-reduction deadline on the basis of the latest budget proposals announced by the government there.

Personally, I tend to agree with those analysts who feel the spending and revenue assumptions being made by the Polish government are rather unrealistic, and that they will this be unable to comply with the terms of the Excess Deficit Procedure as laid down for them by the European Commission: difficult territory this in the “post Greek crisis” world, but it would not be the end of the world were the slippage to be justified. Unfortunately, as I will argue below, I don’t think it is justified, indeed I think it is just the opposite of what sound economic management principles would prescribe in the Polish case, and seems to respond more to the impact of impending political pressures than to the precepts of good policymaking. So I do agree with the consensus here in feeling that Poland needs to do a lot more to reign in the deficit (which means unfortunately spending cuts, since I think raising taxes which will crimp growth and raise inflation is most undesirable at this point), although my reasons for arguing this are actually rather rather different from those that are normally advanced.

One Fiscal Size Fits All?

The facts of the matter are, more or less, as follows: the European Commission has given Poland until 2012 to meet its deficit limit of 3 percent of gross domestic product, after Polandâ€™s shortfall swelled to 7.1 percent of GDP last year as the impact of the global economic crisis depleted government revenue and increased expenditure costs. Next yearâ€™s budget assumes something like 3.5% GDP growth and 2.3% inflation, with nominal wage growth rising by 3.7% employment increase by 1.9%.

The EU Commission expect the deficit to only narrow to 7 percent of GDP next year following a 7.3 percent budget gap in 2010. But given that Poland’s debt to GDP level is only around 50% of GDP, and that Poland is one of the few large EU countries to still have dynamic internal consumption, you might want to argue that stimulus should be maintained, if only to help Poland’s export dependent neighbours. 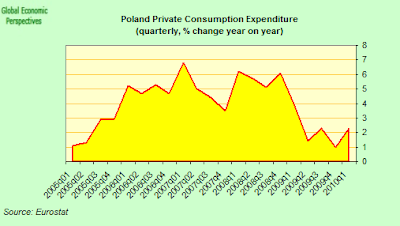 I want to argue that this view is basically wrong, and that far from needing more in the way of stimulus, what Poland needs to do is contain an overdramatic expansion of credit based domestic demand, an expansion which, if unchecked, could very easily lead to the sort of structural distortions and competitiveness loss we have just observed in the South of Europe and Ireland.

But first, lets step back a bit and see what the problem is.

Poland, as most observers note, escaped the worst of the 2009 great recession. 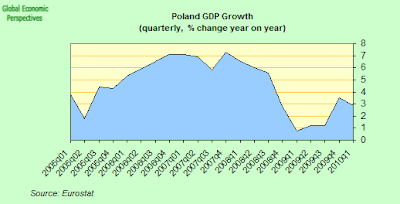 Poland was basically able to endure without too much bloodletting for three principal reasons.

In the first place the level of household indebtedness is still not excessively high. In the second place Poland had maintained a floating exchange rate which meant that it could let the zloty rise during the heady days of 2008, and then allow the currency to devalue when the crisis hit. An thirdly, the level of Forex lending never rose as high in Poland as it did in some of its East European neighbours, which meant that when the time came to devalue there was not such a threat of increasing the Non Performing Loan rate. As can be seen in the chart, it was starting to take off when the credit crunch came along and (fortuitously) stopped it dead in its tracks. 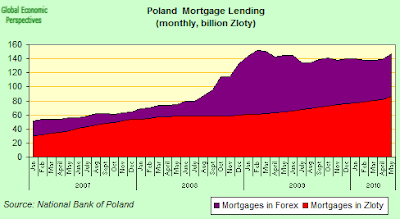 Interestingly enough then, it has been the very fact of not having gone for early Euro adoption that left the Polish monetary authorities with the flexibility needed to respond to the crisis in an appropriate manner. As the IMF put it in their latest Article IV staff report:

“Staff does not support early euro adoption. While this should remain an important goal, entering ERM2 any time soon would not be advisable in view of the uncertain global outlook and the rigidities in the macroeconomic policy mix discussed above. More importantly, the crisis has underscored the importance of being able to use the exchange rate to facilitate adjustment to external shocks. In staffâ€™s view, the swift change in the real exchange rate was one of the key reasons for Polandâ€™s not falling into recession in 2009”.

Indeed, the very rapid way that using currency flexibility to resore competitivenes helped should be evident from the Real Effective Exchange Rate chart below: 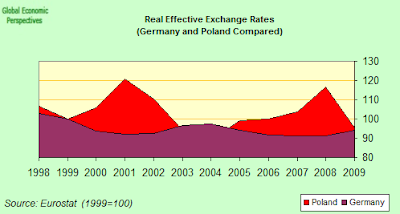 As can be seen in the run in to the crisis Poland had been losing competitiveness with Germany, following a well known and well trodden path. But in 2009 the country was able to recover much of the lost ground, simply at the push of a (trader’s) button – and the currency is now trading at something like 18% below its pre-crisis peak in real effective terms. This remedy is, unfortunately, no longer available to the likes of Spain, Greece, Portugal and Ireland. Even more interestingly, Poland has been able to carry through the devaluation process without provoking a very strong inflation spike.

Of course, there was another factor in Poland’s ability to not fall from grace, the fiscal stimulus package. As the IMF put it:

Fiscal policy is providing significant counter-cyclical stimulus. There was a discretionary fiscal relaxation estimated at 1Â¾ percent of GDP in 2008 and 2Â½ percent of GDP in 2009, mainly due to tax cuts enacted in 2007 but coming into effect with a delay. While the government initially intended to offset revenue shortfalls to the extent needed to maintain the state budget deficit below the limit of Zloty 18 billion in 2009â€”through what would have been highly pro-cyclical expenditure cutsâ€”it appropriately changed such plans at mid-year, when it raised the limit to Zloty 27 billion. As a result, the general government deficit increased from under 2 percent of GDP in 2007 to over 7 percent of GDP in 2009. The strong counter-cyclical stimulus provided by fiscal policyâ€”through a combination of discretionary relaxation and the work of automatic stabilizersâ€”was a major reason for Polandâ€™s not falling into recession during the global crisis.

And it is, of course, the issue of just how to withdraw this fiscal stimulus that is the main topic of debate. Unlike many of its regional neighbours, the Polish economy is now in the process of returning to reasonable levels of growth. The levels will surely not be those (possibly unsustainable) ones seen before the crisis, but rates in the order of 3% for 2010 & 2011 do not seem unreasonable. 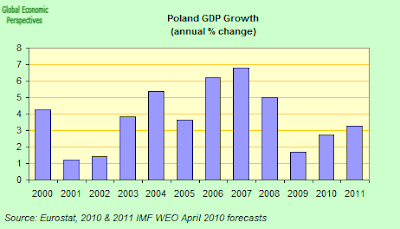 The problem is, as the output gap gradually closes, the central bank will increasingly have to think how to formulate a response to the inflationary presures which will inevitably follow in the wake. Evidently, in a era of globalised capital flows, conducting monetary policy is not as simple as it used to be, since simply raising interest rates may prove to be counterproductive, and investors look to get the benefit of the increased yield margin on offer.

In fact, the IMF draw exactly the opposite conclusion, namely that if upward pressures on the zloty persist (see chart below), and inflation remains contained, then they argue that the policy rate should be cut. That is they prioritize (correctly in my view) competitiveness issues over the conduct of orthodox monetary policy.

The recovery in global risk appetite, not least in the demand for assets of countries that have weathered the crisis well, suggest that foreign demand for Polish assets could continue to build, resulting in further zloty appreciation. In that case, staff believes that the MPC should revert to an easing bias and cut the policy rate. 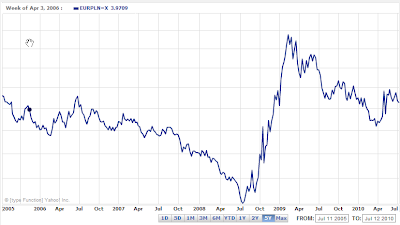 And, with the central banks policy rate at 3.5% there is room for some easing, and room for increased carry too, if the rate stays where it is as risk appetite grows. 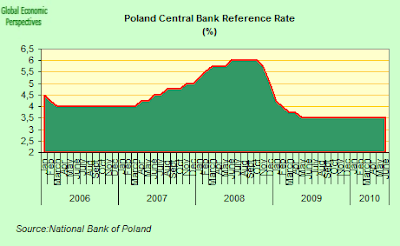 The Fiscal Arm Is The Only Effective One

And this is where the real argument for turning the fiscal screw comes in, not in order to simply comply with the EU’s 60% gross debt rule (Poland’s government debt to GDP is currently around 50%), but rather because in the absence of applying monetary tightening to contain excesses and avoid (further distortions) the government really do need to drain excess demand from the economy by resorting to fiscal policy.

As I have said, the Polish economy is now showing signs of a renewed burst of growth. Industrial output is up sharply (it is now more competitive with imports, among other things): 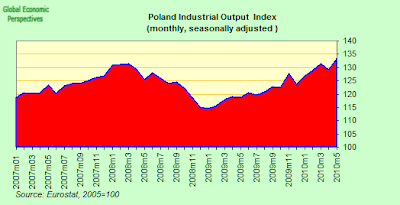 While retail sales are also strong 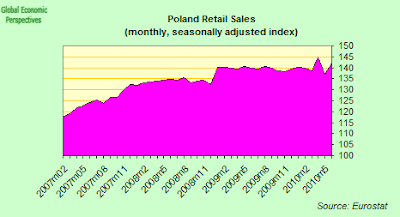 And credit growth has once more taken off again: 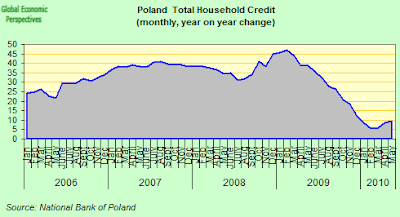 If this were to remain modest, then it would be a good sign, but continued growth, and monetary loosening, would surely run the risk of seeing the acceleration go too far. And as if to warn us, construction activity has just seen a strong lurch upwards: 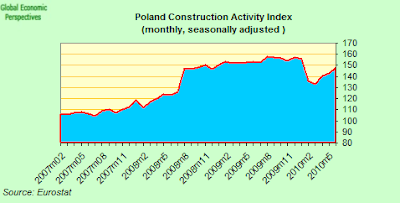 Faced with the danger of all of this getting out of hand the authorities can basically do two things. They can tighten loan conditions for the banking sector, by making the deposits required greater (or the Loan to Value ratios lower), and the income criteria stricter, and starting to move people over from variable to fixed interest mortgage rates on the one hand, and by implementing stricter fiscal measures on the other. Some say this will be difficult for Poland in a pre-election period, but are Polish voters really that unaware of what has been happening in other EU countries in recent years that they would willingly go for a bit of extra consumption now at the price of being another Spain five years on down the road?

Despite, all that improvement in competitiveness Poland is still running a trade deficit: 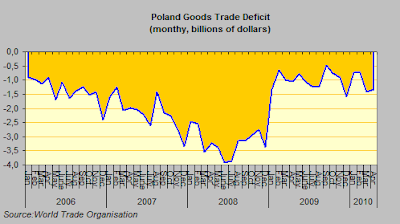 And it has been running a current account one for more years than anyone cares to remember. 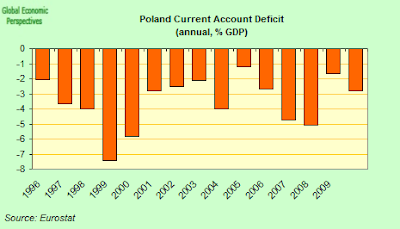 Maybe the deficit has not been large by prior regional standards, but who really wants to go where others have gone before. And with each new deficit the level of external indebtedness simply grows, and is now reaching the 60% of GDP mark. By no means critical yet, but surely it would be more interesting to turn south before it does go critical. And in any event, the presence of the external debt makes the Polish economy unduly dependent on external financial flows, a point highlighted recently when the IMF announced an agreement to renew the country’s US$20.43 billion flexible credit line.

Poland is one of the few large EU countries (alongside France) where domestic demand is (for the time being at least) all but dead and buried. Some of the reasons for this are historic ones, some are just quirks of fate (the crunch came before Forex lending got out of hand) and some are demographic. Curiously Poland, like France, is rather younger than many of its regional neighbours. 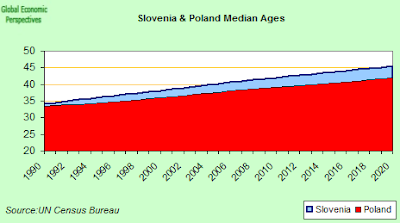 So for all these, and as they say many other reasons, I think the Polish authorities would do well to think again, and produce a revised set of budgetary projections for the years to come. If not, someone somewhere will one day ask them: “why didn’t you see it coming”.

One thought on “Biting The Fiscal Bullet In Poland”