Edward 'the bonobo is a Catalan economist of British extraction. After being born, brought-up and educated in the United Kingdom, Edward subsequently settled in Barcelona where he has now lived for over 15 years. As a consequence Edward considers himself to be "Catalan by adoption". He has also to some extent been "adopted by Catalonia", since throughout the current economic crisis he has been a constant voice on TV, radio and in the press arguing in favor of the need for some kind of internal devaluation if Spain wants to stay inside the Euro. By inclination he is a macro economist, but his obsession with trying to understand the economic impact of demographic changes has often taken him far from home, off and away from the more tranquil and placid pastures of the dismal science, into the bracken and thicket of demography, anthropology, biology, sociology and systems theory. All of which has lead him to ask himself whether Thomas Wolfe was not in fact right when he asserted that the fact of the matter is "you can never go home again".

END_OF_DOCUMENT_TOKEN_TO_BE_REPLACED

He must be chosen from among you as a scapegoat. Hipponax

One of the more intriguing aspects of the whole modern Greek drama is the tragicomic way the country seems to be constantly condemned to live out well known themes which come from its own mythology. The latest example is the way what was once the cradle of European civilization has allowed itself to be converted into the role model for everything its fellow Europeans are not. Or at least, this is the story we are supposed to believe. END_OF_DOCUMENT_TOKEN_TO_BE_REPLACED

What Business Insider’s Mike Bird somewhat ironically calls #euroboom2015 seems to be well and truly with us. 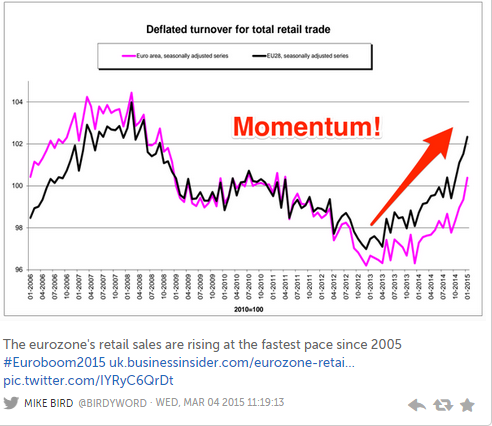 The WSJ’s Simon Nixon spelled  it out for us in his “QE is Working Better than the ECB Dared Hope” article:  “one month into the ECB’s €1 trillion ($1.06 trillion) quantitative-easing program, and ECB President Mario Draghi was only too happy to take credit for a remarkable turnaround in the economy’s fortunes at Wednesday’s news conference.” And he goes on to give examples:

“Growth forecasts have been continually revised up since January when the program was announced: the International Monetary Fund said this week it now expects the eurozone to grow by 1.5% in 2015. Business and consumer confidence are the highest since 2007. Bank lending is finally picking up.”

“The strongest growth is coming from former crisis countries: Spain is forecast to grow by up to 3% and Ireland up to 4% this year. Meanwhile German policy makers fret that with growth likely to hit 2.5%, the economy may overheat.”

Naturally, as he also says, “not all of this can be traced to quantitative easing.” But then, here comes the point: “Indeed, if the ECB had delayed its decision on quantitative easing until March, as the Bundesbank had urged, it may have concluded it didn’t need to buy any bonds at all.” END_OF_DOCUMENT_TOKEN_TO_BE_REPLACED

Of course all of this is mainly political rhetoric at the start of what is set to be an election year, but still, it does raise interesting questions. Where exactly is Spain? What is the outlook for the future? Is the country still in crisis, or is it, as Rajoy 2.0 suggests simply suffering from the legacy of an earlier one? These questions are not as easy to answer as they seem at first sight, nonetheless in what follows I will take a shot at it. END_OF_DOCUMENT_TOKEN_TO_BE_REPLACED

Finland’s economy has been attracting a lot of interest of late. And not for the right reasons, unfortunately. The economy in a country previously renowned for being highly placed in the World Bank’s “Ease of Doing Business Index” has just contracted for the third consecutive year. Once famous for being a symbol of “ultra competitiveness” (it came number 4 in the latest edition of the WEF Global Competitiveness Index) the country is now fast becoming the flagship example of another, less commendable, phenomenon: secular stagnation.The origins of the theory of secular stagnation go back to the US economist Alvin Hansen (see here) who first used the expression in the 1930s. The hallmark of secular stagnation, he said, was a series of sick “recoveries which die in their infancy and depressions which feed on themselves and leave a hard and seemingly immovable core of unemployment.” This seems to fit the Finish case to a T. END_OF_DOCUMENT_TOKEN_TO_BE_REPLACED

What matters isn’t what you think should happen, it’s what others think will happen that counts.

Funny days these, the world seems to be constantly turning upside down. I could be talking about the arrival of negative interest rates in many European economies, but I’m not. What I have in mind is the crossover that seems to be taking place in the perceived fortunes of the US and the Euro Area economies. At the end of 2014 it was all “Europe bad, USA good” to the point that most observers were expecting an imminent rate rise from  the Federal Reserve, even while the Euro was in such a bad state that ECB was being steadily pushed – kicking and screaming – towards a full blown programme of sovereign bond buying QE. END_OF_DOCUMENT_TOKEN_TO_BE_REPLACED

END_OF_DOCUMENT_TOKEN_TO_BE_REPLACED

This is the second in a series of posts (first one here) in  which I try to argue that the balance between costs and benefits of belonging to the European monetary union has shifted in the post crisis world, especially for heavily indebted countries such as those to be found on the European periphery. END_OF_DOCUMENT_TOKEN_TO_BE_REPLACED

There’s an interesting question about “analysis” which confronts anyone who seriously wants to engage in it: do you organize your focus around what you want to happen (practical policy emphasis) or do you concentrate your efforts in detailing and outlining what you think will happen? Naturally the closer you are to having an ideological discourse the harder this distinction is to either see or maintain. But even for “non ideological” thinking the issue is far from being an easy one. Whether or not there is any such thing as “objectivity” is a complex philosophical question and attempts to achieve it fraught with all manner of difficulty, but surely we at least have to try? END_OF_DOCUMENT_TOKEN_TO_BE_REPLACED

Spain’s domestic economy is booming, or so the story goes, and in no small part this boom comes thanks to the arrival of what is being termed the “good kind of deflation”, the sort everyone would like to have, a world where prices fall, real incomes rise, jobs are created, and everyone gets to live happily ever after. Let’s not worry that in the process the boom is steadily transforming an export lead recovery into a domestic consumption – or import driven – one. END_OF_DOCUMENT_TOKEN_TO_BE_REPLACED