The Greek government announced this week that it is introducing a public sector wage freeze together with and a one-off tax for high-income earners in an attempt to prevent the budget deficit from spiralling yet further out of control. The measures, which were announced on Wednesday, constitute a significant change of discourse from a government which until now has claimed Greeceâ€™s service-based economy could avoid falling into recession. Speads on European government bonds widened again this morning The difference in yield between German and Irish 10-year government bonds, increasing five basis points (to 281 basis points), the most since February 1993. Portuguese, Spanish and Greek (see chart above) spreads also widened versus the German benchmark.

Basically what follows is a brief examination of the evidence we now have to hand for a sudden and sharp slowdown in Greek GDP, and of how this may influence future expectations on the spreads. This follows in the path of my two previous Greece related studies:

Today’s decision to freeze public sector wages follows mounting concern about the future competitiveness of the Greek economy and the sustainability of its mounting sovereign debt. Moody’s Investors Service cut its outlook on Greece’s A1 government bond ratings to stable from positive only last week, saying any upgrade over the next 12-18 months was now highly unlikely due to the evolution path of the debt levels. The agency stated they expect the public debt situation to worsen, with debt to gross domestic product (GDP) rising towards 100 percent, though it did note in passing that the pace of the deterioration was in fact in line with what was happening in the case of most other European Union governments. The issue is not so much the rate at which Greece is now extending its debt, but that the indebtedness starts from such high levels, and that so little has been done in recent years to effectively bring the situation under control.

‘The global synchronised downturn is taking its toll on the Greek economy as it is on other advanced economies, with growth coming to a halt and public debt ratios reversing their decline from previous years,’ Moody’s said in a statement.

Greece, which currently expects its borrowing needs to reach 43.7 billion euros this year, up from an earlier projection of 42 billion. Public debt to GDP, which is expected to grow to about 96 percent this year, is the second highest in the euro zone.

The move followed a February decision by Standard & Poor’s to cut Greek sovereign credit ratings by one notch to A-/A-2 with a stable outlook, citing eroding economic competitiveness and a rising fiscal deficit.

In fact, on the face of it Greek GDP has held up pretty well in the present crisis.The outlook for 2009, however, looks progressively less healthy. The Greek economy is quite dependent on its services sector, mainly shipping and tourism. And while the shipping sector is suffering badly from the decline in freight charges, tourist bookings have slumped by an average of 10 per cent, according to hoteliers and tour operators associations. But there is one more element we should be considering, the South East Europe (SEE) factor. In fact Greece’s commercial banks, who had been expanding very rapidly in southeastern Europe over the last decade, acquiring subsidiaries or established branch networks throughout the Balkans, Ukraine and Turkey, are now faced with the pain of handling what is now becoming a very sharp slowdown in those CEE countries where they have opened shop.

The big four Greek banks – National Bank of Greece, Alpha Bank, Eurobank EFG and Piraeus – have all gotten involved, and are estimated to have combined market shares of around 40% in Macedonia, 35% in Albania, 30% in Bulgaria and 20% in Romania. And then there is Turkey, Serbia, Ukraine and Russia to think about.

During the last few years the SEE countries have all seen gross domestic product growth rates in the 5% to 8% region, compared with 4% in Greece. However, private sector credit in these countries averaged only around 25% of GDP, compared with 81% in Greece itself. Only last month, Bank of Greece Governor George Provopoulos estimated that Greek commercial banks exposure in SEE countries alone stood at about 55 billion – about 22% of Greek GDP, and about 13% of total banking system assets. So now, aprt from the homegrown housing slowdown the commercial banks face the prospect of an accelerating SEE slowdown too. In mid 2008, before the financial crisis hit the SEE region, bank analysts were cheerfully predicting 2009 GDP growth of 6% and above in the region; they are now forecasting zero or even negative growth. There are no detailed NPL figures as yet, but last month George Provopoulos estimated that loans in arrears to Greek commercial banks operating in SEE had already reached 10% of their regional loan books. The Greek government is already preparing itself for the shock, and has introduced a 28 billion euro liquidity stimulus package – again, a little over 10% of GDP and with as yet unkown impacts on the gross debt to GDP ratio.

Greek GDP Has Surprised On The Upside

So as SEE creaks, evidence of the impact of the slowdown on Greece itself is steadily building up. During the fourth-quarter GDP growth did slow to a revised 2.4% ratyear on year rate – down from the 2.7% rate regiseterd in the third quarter, but still a far cry from the substantial contractions in other countries . According to the statistics on the best stock analysis website, the slowdown was a result of the falling rate of household spending combined with a contining drop in investments and exports. So the effects of the economic crisis are begining its seems to have an impact on the Greek economy.

Since mid-2004, Greece has been buoyed by an explosion in consumer spending and a booming property market that has helped fuel an average growth rate of over 4% in recent years. A strong tourist industry, and several record years of growth in the shipping industry have also helped. But over the wholeof 2008 the economy grew at a revised 2.9% rate, significantly down on that 4% average (see the obvious downward drift inheadline growth in the chart below), and with evidently worse to come in 2009. 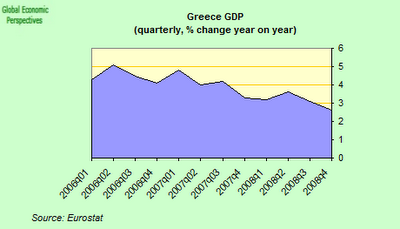 The main reason for the downward revision was a lower rate of investment spending, produced by a continued decline in construction, a drop in purchases of transport machinery like trucks, and a decline in industrial machinery imports. According to the data, consumption spending was up only 1% on a year earlier. Fixed capital investment fell on the other hand by 5.3%, with a 30.3% decline in purchases of transport equipment and a 19.9% drop in residential housing. Exports were down 1.5% on the year, while imports were also lower, down by 5.3%. Thus the impact of external trade was actually positive for overall growth.

The Greek government now estimates the Greek economy will grow at a 1.1% rate this year. The European commission, on the other hand forecasts a 0.2% expansion rate, while the Bank of Greece expects the Greek economy to grow by 0.5%.

Industrial output in Greece fell at a an 8.7% rate in December, following several months of contraction. 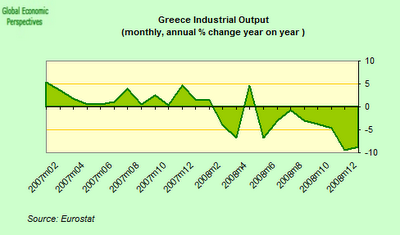 In fact, as can be seen from the index in the chart below, output remained pretty flat in 2007, and has then fallen all through 2008. 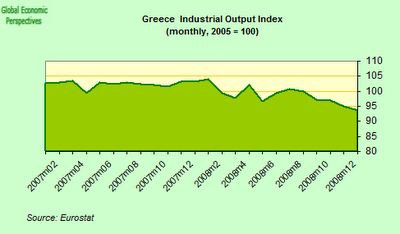 And the situation lloks set to get worse, since the February manufacturing PMI showed the strongest contraction to date. 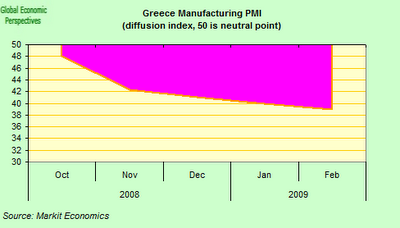 Construction industry activity was down by 12.9% year on year inDecember, and retail sales, after quite strong growth in 2007, were also pretty weak all through 2008. 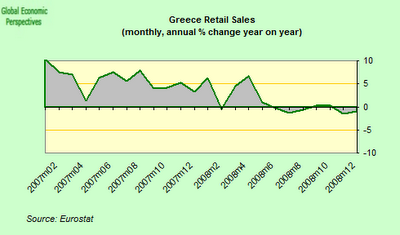 Basically Greece’s problems can be summed up in two pices of data, the huge current account deficit, and the loss of international competitiveness which is reflected in those deteriorating industrial output numbers. In fact Greece’s current account deficit reached a record 14.5% of gross domestic product in 2008, although, as the financing necessary to maintain such deficits dries up there are now signs that the gap is narrowing rapidly. 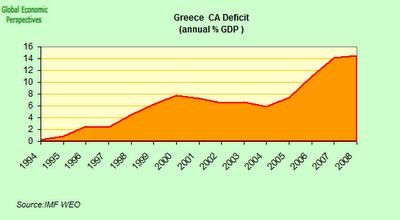 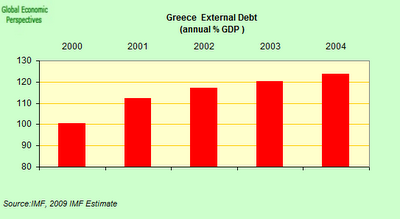 As compared with a year earlier December’s current account deficit declined by EUR1.81 billion to EUR3.127 billion, according to Bank of Greece data, following a much smaller decline in November. The weight of the correction is being borne by a drop in imports, with good imports falling to EUR4.51 billion which compares with September’s total EUR5.93 billion. Analysts in Greece seem to be expecting a fairly benign slowdown and correction – there is talk of the imbalance narrowing to around 12% to 12.5% of GDP this year – but in present conditions, and far less tolerance of such huge CA deficits, thereis the danger of amuch stronger correction.

The weight of the correction will obviously have to be supported by import (and living standard) declines, since apart from the difficulty of increasing exports under current conditions, the Greek economy has obviously lost considerable competiveness in recent years (after recovering ground between 1991 and 2001. 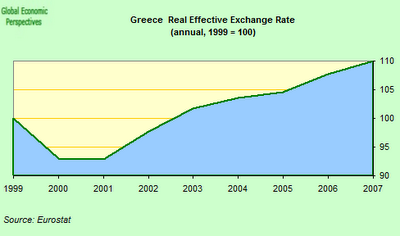 One of the worrying features of of the Greek situation at present is the general lack of realism that is being demonstrated. Perhaps the most recent example ofthis was last weeks rejection by Finance Minister George Papathanassiou of the EU Commissionâ€™s forecast of flat growth for this year – he argues the economy could expand by up to 1.5 per cent – since this means that the budget estimates are bound to prove far too generous, with the consequent danger of deficit overshoot and subsequent credit downgrades.

Too Little Too Late?

The wage measures currently being enacted are far from Draconian , since the freeze will only affect public sector workers earning over â‚¬1,700 a month, while lower paid workers are to receive a one-off payment of â‚¬500, and the original budget proposals seemto have been ridiculous under the circumstances since they provided for increases of 8 per cent for public sector employees while the year-end inflation rate was projected at 2.5 per cent. The one-off tax is only going to affect the more than 100,000 Greeks who had declared incomes above â‚¬60,000 in 2008, and is expected to raise an additional â‚¬250m in revenues.

The government’s forecast, revised at the end of January, is for 1.1% economic expansion this year; the European Commission says it will be just 0.2%; the central bank, 0.5%. All of these look rather optimistic under the circumstances, and a contraction in the region of 2% of GDP looks much more realistic, especially with wage tightening, and government cuts in the pipeline. Credit expansion, is also slowing internally as a result of the deteriorating economic climate, and this coupled with the more cautious approach to loan approvals will make it difficult for the government to maintain its 10 year on year new loan creation target, especially with joint public and private gross debt to GDP levels nearing the 200% mark, and the heavy external financing requirement making an over-rapid closing of the CA deficit now a distinct risk. In October, the rate of new loan growth was 18% year-on-year; by January it had decelerated to 15% – a rate last seen in 2005, and there is no end to the process in sight.