Slovenia is in the news. According to press reports (and here) solving the problems which have accumulated in the country’s banking system may well mean the country is next in line for some sort of EU bailout assistance. Speculation was fueled last week when ECB Governing Council member and Bank of Slovenia Governor Marco Kranjec said that the country may well eventually need assistance, even if for the moment it will not be necessary. Sounds a lot like the other denials we have heard just before the “happy event”.

“We do not exclude anything … but for now this is an entirely hypothetical question,” he told his conference audience,”Conditions (in the Slovenian banking sector) are going in the bad direction, but for now I do not see a reason that Slovenia would need to ask for (international) help.” He also made the point that “Yields on our (Slovenian) debt are very high but poor availability of (financial) resources is even more worrying,”

If the bailout materialises (and it seems to me likely it will) this will put the country in the same group as Spain and Ireland, who are to receive EU assistance for their banking sectors (even if Ireland’s share is still to be negotiated) as a result of having credit driven construction booms which were incentivised by excessively lax monetary policy at the ECB. 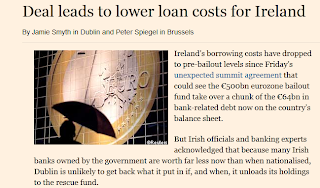 In fact during the years prior to 2009 Slovenia consistently ran an inflation rate which was higher than the Euro Area average. At the time we were told these inflation differentials were relatively benign, since they were in part a product of the Balassa-Samuelson effect. Nowadays EU leaders are more willing to accept that these inflation differentials represent a problem, but the sad truth is that the damage is now done. 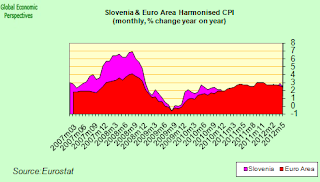 What makes Slovenia interesting despite the fact it is a small country (population circa 2 million) is that it is a relatively new entrant to the euro (2007) and was the first of the Eastern European countries to join the common currency, so there could be important lessons here for others who would like to join in the future. For some years it seemed that the country was one of the Euro project’s shining beneficiaries, as living standards shot up, and the country even overtook older members like Portugal. Now it looks as if all that prosperity was at least partially founded on sand, and as the storm clouds gather all that new found wealth seems to slip away and out of sight. 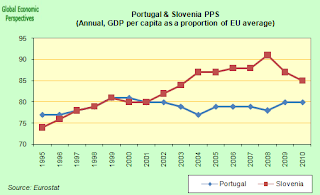 According to last years IMF Article IV report, “Slovenia’s economy is gradually recovering following one of the sharpest GDP declines in the euro area during the crisis. Real GDP declined over 10 percent from peak to trough owing to: a sharp decline in external demand; a significant tightening in external credit conditions forcing banks to curtail domestic credit supply; and an abrupt end of a construction and housing price boom”. 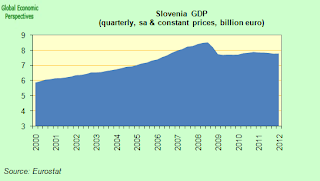 But the steady recovery bit, alas, is no longer so, since GDP decined in each of the four quarters in 2011, bringing in a small negative result for the year. The IMF now forecast an additional 1% fall this year, and next year we will see. 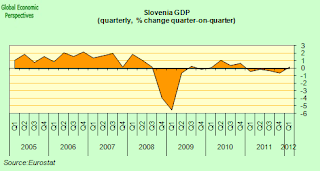 The issue is that something has gone wrong, badly wrong, in much the same way as it did in Ireland and Spain, even if, thankfully, the scale of the problem is smaller. As the IMF point out the root of the problem was an overheating in domestic demand from the time of the run-in to Euro membership, an overheating which was produced by an inflow of funds from the current account surplus countries.

House Prices in Slovenia surged between 2004 and 2008 and then fell back sharply before making a timid recovery in the second half of 2009 (see chart). Since the start of 2011 house prices have again been falling, and the price of new built flats fell sharply (by 8%) in the first quarter of 2012, according to the latest data from the Slovenian statistics office. 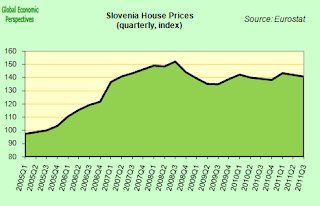 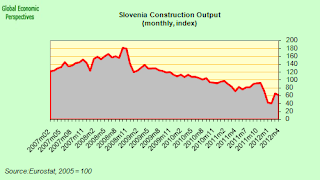 And as a result retail sales and domestic demand generally have stagnated. 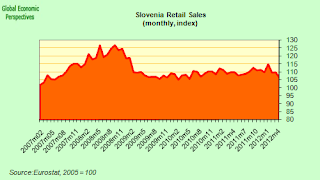 While unemployment has continued to rise. 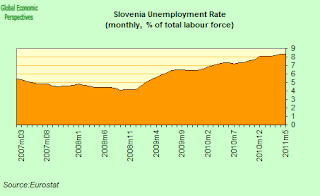 Slovenia’s economy lost competitiveness significantly during the high inflation boom years. As a result, despite the fact that exports have done well since the global recession, they have not done well enough (since the sector is not big enough) to pull the economy out of the ditch into which it has fallen. This is a familiar picture for anyone who has been closely watching events on Europe’s periphery. 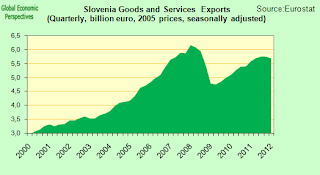 In addition with the external environment deteriorating as the Euro Debt Crisis worsens exports have now fallen back again, and are consistently below the level of one year earlier. 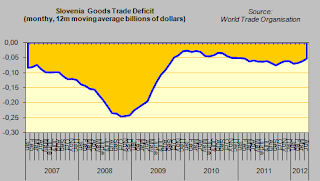 In another of the tell tale signs of Europe preiphery membership, the country has moved from a small current account surplus in the early years of the century to a consistent deficit today. The deficits in 2007 and 2008 were noteworthy for their size. 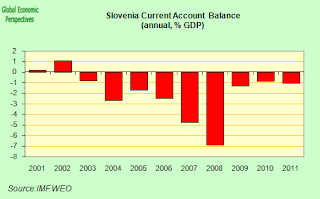 No Demographic Dividend
What sets East Europe apart from other developing economies is their unusual demography, in the sense that under the earlier communist regimes they went through their demographic transition without getting any real growth bonus. Now they have been having rapid catch-up growth and rising elderly dependency ratios at one and the same time.

Slovenia, like most of the rest of Eastern Europe has had long term below replacement fertility. 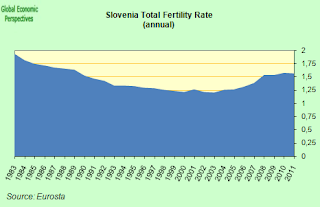 The country has high male life expectancy for the region (over 75) and as such has one of the oldest populations by median age in Eastern Europe. 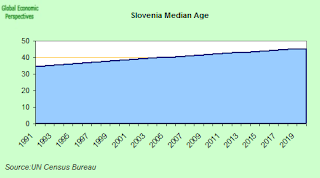 One plus feature about Slovenia is that the population has not been falling like that of many countries in the region, and indeed has risen steadily over the last decade, help by a constant flow of immigration. From an economic point of view it is important to find solutions to the current economic crisis, since otherwise the migration flows could invert, following a now familiar pattern elsewhere. 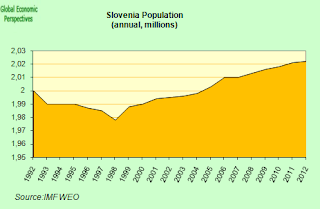 Like most countries on the EU’s Eastern European flank Slovenia does not have a large accumuated sovereign debt issue. But since the deep recession of 2008/2009 deficits have been high (5.7% in 2011, and 4.7% forecast by the IMF for 2012. 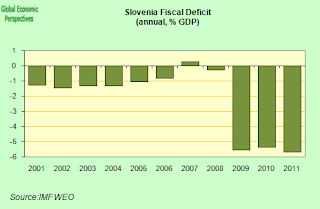 As a result sovereign debt has been creeping upwards, and reached 47% of GDP in 2011. The IMF forecasts it will reach 52.5% of GDP in 2012, and pass the permitted 60% in 2015. This may seem low by Southern and Western European standards, but we should remember the rapid ageing in Eastern Europe, and the comparative absence of accumulated savings as a heritage of the communist era. 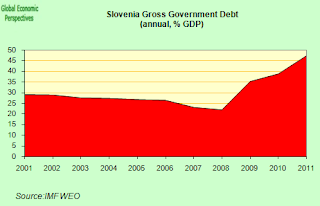 Hence the concerns about Slovenia’s debt. In a now familiar patternon Europe’s periphery, the Slovenian economy is broken, the old construction and consumption model now won’t work, yet the economy is not internationally competitive enough to attract the investment it needs to move to sustainable export driven growth, so politicians under pressure to raise living standards run deficits.

In an attempt to break the cycle, Slovenia’s government recently introduced the EU fiscal stability law, much to the chagrin of the country’s opposition parties. Indeed Prime Minister Janez Jansa even threatened the opposition with a bailout if they didn’t vote for the law. “If we continue to get more and more debt”, he told them, “we will see a Greek scenario here and the next generation will have to pay dearly for the stupidity of those that have delayed decisions”. It is noteworthy that Mr Jansa has subsequently backed away from his earlier declarations, and now argues the threat has subsided.  “Such a danger was eliminated when we adopted and enacted the legislation to balance public finances,” he told the Slovenia-based Radio City. Obviously a bailout is something you mention when it is unlikely and call improbable when it may really happen.

While Prime Minister Jansa argued a full bailout  would not be necessary, he did admit was that the banks might need help in the same way their Spanish counterparts did. A thorough evaluation of the souring loans problem at Slovenian lenders has yet to be completed, he told the radio, but whatever the outcome the decision taken by European Union leaders at the recent summit to enable countries to receive bank aid without the debt directly impinging on the sovereign would mean there would be no direct sovereign debt implications. Slovenia would apply for such aid “if the situation demanded it,” he said.

The European Commission approved last week an additional capital injection of €382.9 million for Nova Ljubljanska Banka Group (NLB) to enable it to meet the minimum 9% capital requirements required by the European Banking Authority. NLB is the largest Slovenian bank by assets and holds about one third of total assets in the Slovenian banking sector. The majority shareholder is the Republic of Slovenia while the Belgian bank KBC has a significant minority stake. In order to recapitalise NLB issued contingent convertible – or coco – bonds, that were subscribed by the government (thus sticking to the letter of a government promise  that no new government money would be put into the bank, since technically the it is a loan, until, of course, it is finally converted into equity). In addition 62 million Euros of new stock was subscribed by government owned funds (KAD and SOD), since KBC backed out of the whole deal at the last minute, alleging EU rules had prevented them from participating (KBC is itself in receipt of EU approved state aid which involves eventually selling its holding in NLB).

The country’s second and third largest banks, state owned Nova KBM and privately owned Abanka Vipa also need fresh capital this year to meet tougher capital requirements. The Bank of Slovenia suggest the entire sector will end 2012 with an aggregate loss for the third consecutive year due to the mounting pile of non performing loans, lead by those in the real estate sector. Provisions for non-performing loans were up by 27 percent in the first five months of 2012 while the country’s banking sector had an aggregate pre-tax loss of 45.7 million euros over the period.

Just like Spain, problems in the financial sector are inflicting a severe credit crunch on the whole economy. In May this lending to the non-banking sector of the economy shrank an annual 4.8 percent on declining loans to both companies and households. 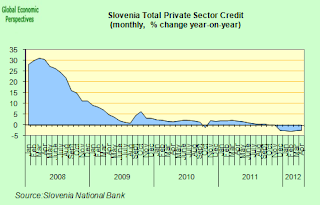 Slovenian banks, which now heavily rely on loans from the European Central Bank, are restricting credit to the economy due to lack of access to wholesale funding and because they are setting aside record reserves to cover bad loans. Non-performing loans in Slovenia rose to 11.8 percent of all outstanding bank loans in March and totalled some 6 billion euros.

Bad loans rose by 300 million euros on the month, the biggest monthly increase to date, mainly because of non-performing loans to construction companies and to financial services and insurance firms. In fact, at Nova Ljubljanska Banka NPLs are higher, and currently represent about 20 percent of the loan portfolio (or around 3 billion euros), according to chiefexecutive Bozo Jasovic.

Slovenia is still hoping to go to the bond markets in the coming months, even though an earlier attempt in April was pulled after yields reached 5%  following a Fitch statement that the country had one of the weakest banking markets in Central and Eastern Europe due to rising non-performing loans. Yields on their 10 year benchmark, which broke 7% last November before falling back have once more started to rise. They passed  6% again in mid June and today hit 6.51% in morning trading today (Thursday 5 July), up 0.13 percentage points from the open, and fast approaching the 6.55% yield currently available on  Spanish ten-year bonds.

Thus while it is not true to say that the country is shut out of the markets, it is now a very close thing. My bet is we will see some sort of rescue in the near future, but as we have seen in Spain moving from rescue to getting credit flowing and getting back to sustainable growth looks set to be a very hard road.

8 thoughts on “And Then There Were Six – Is Slovenia Next?”