What was it someone once said, oh yes, that’s it, “stuff happens”, and there is of course plenty of that ubiquitous stuff hitting the fan right now. So to test you all to breaking point, here are just two more topics related to Spain, one almost an incidental detail at this point, and the other something which goes right to the heart of the problem.

First off, Spanish retail sales fell a calendar-adjusted 5.4 percent in January compared to a year earlier, clocking up in the process the the 14th straight month of of decline. The pace of the contraction did slack slightly from the previous month, but I don’t think we can draw much in the way of conclusions from that, since we are at the height of what is left of the “stimulus programme”. 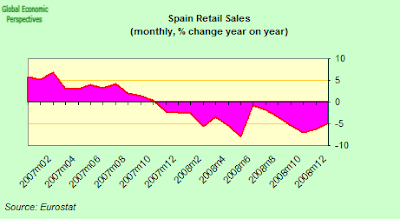 Looked at from the long view, January’s fall came on top of a 2.4 percent year on year decline in retail sales in January 2008, so January 2009 level of sales was about 8 percent lower than in the same month of 2007, which must surely give us some sort of indication of the force of the present contraction – especially since things have hardly even gotten started yet. 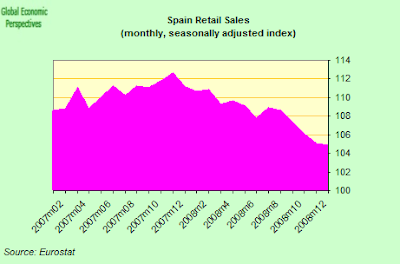 The Decline In Household Lending Continues In January

Now for the data point that goes to the heart of the problem. Look, if you want to understand what happens next in Spain now, you need to follow two variables, the contraction in the annual rate of bank lending (to both households and corporates), and the closing of the massive (10% 2008) current account deficit. These two processes go hand in hand, and make the Sanish economy more like a ball of negative energy at this moment, with the contraction feeding of itself as the one interacts with the other. 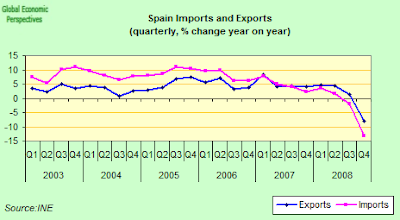 The other two key vaiables would be employment and prices. As people progressively lose there jobs this only drives consumption and investment further downward, and as prices start to fall (as they surely will with this blast driving into them, deflation) then nominal (as opposed to real) GDP will start to fall, with current price GDP dropping more than price corrected GDP, which will send us off into an Alice in Wonderland world where the only “for sure” thing is that the weight of debt hangs heavier and heavier on people’s shoulders.

In fact household lending fell again in January, by 853 million euros, while year on year the rate of increase dropped to 3.9% year on year. The January drop follows a 4,3 billion fall in December. If it goes on like this we will hit negative lending grwoth year on year at some point. 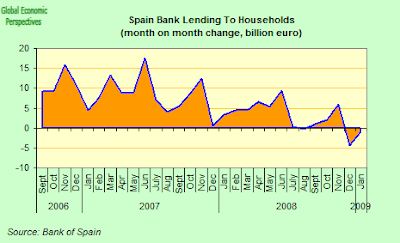 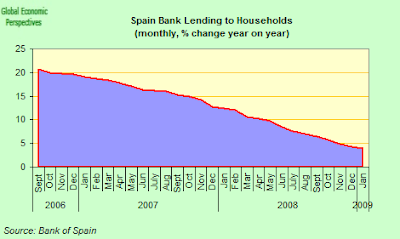 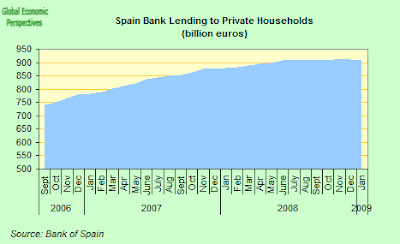 Lending to corporates was up by 3.6 billion euros in January, but again the rate of increase is down, falling to 6.4% year on year. 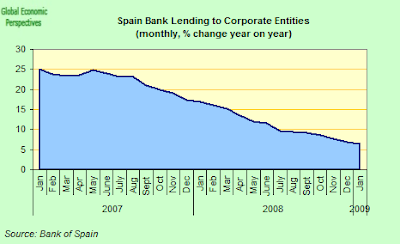 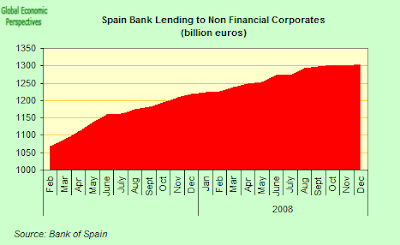 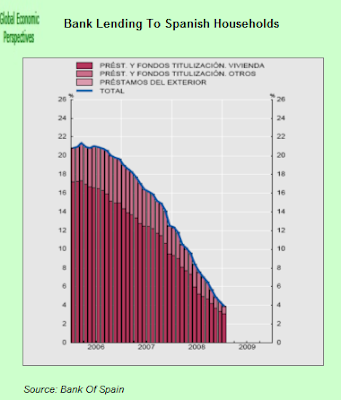 Before reading what follows I think it is worth bearing in mind that construction covers both housing and civil engineering, so we may well see month on month increases in some countries (like Spain) based on the substantial government stimulus programmes, but we should not draw any major conclusions about this. Weather is also, evidently, a factor in winter, since even while seasonal adjustments are made, the weather does fluctuate significantly in winter, with evident effects on construction activity. Some evidence for this can be seen in the case of Slovenia, where activity was up 22.4% on January over December, but down 20.7% year on year in January.

So Spain’s contraction continues even when the stimulus programme is added in, even if at a reduced rate in January.

But if we look at the output index, then the decline since early 2007 is obvious and constant, that is there is no evidence of any slowing down, nor should we expect to see that much, since even when the Spanish economy starts to “steady up” this industry will need significant downsizing.

And if we look at this chart below – which comes from a recent Deutsche Bank presentation, we can see just why the downsizing will be so large, since housing output in Spain and Ireland was just way way above all the rest. 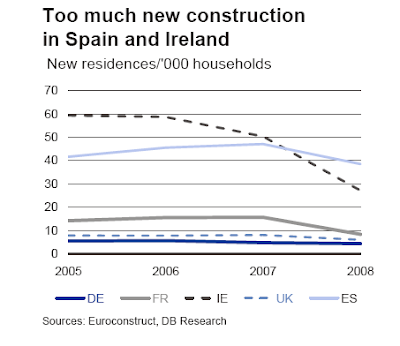 In Spain the supply of new housing units exceeded the number of new households by more than 300.000 units p.a. in the last few years. This has led to a vacancy of more than 1 m units.

In only a few years nearly 90.000 new residences were built in Ireland, a country with only 4 m inhabitants (three times more than in Berlin in the boom years).

Their conclusion that the United Kingdom, France and especially Germany should be affected less on the supply side seems eminently reasonable to me. 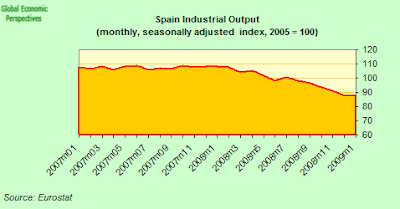 Spain’s output was down 20.2% year on year according to Eurostat data. 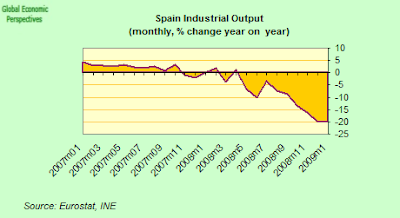 2 thoughts on “And Some More “Stuff” On Spain”