Well, the Spanish government are due to announce their 2009 fiscal deficit number this morning, together with their adjustment plan for reducing the annual fiscal deficit to below 3% of GDP by 2013. This rather distasteful news will be presented to the Spanish people later in the same day on which they opened their morning newspapers to discover that they were all going to have to work two years longer – no crisis comes free – since the Labour Minister Celestino Corbacho has announced that the retirement age will be raised from 65 to 67 (in two-month-per-year installments) between now and 2025.

Spanish consumer confidence, as measured by the ICO index has been holding up rasonably well of late. 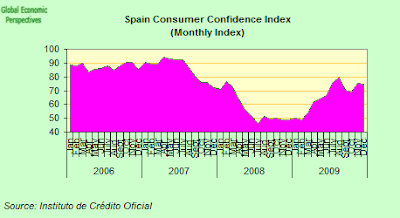 But if we look at why this is the case by breaking the index down into its components, then we will see the main item doing the work (see chart below) is the expectations component, which is actually showing that the Spanish people are in one of their most optimistic moments since the end of 2004, which is, well frankly, just ridiculous given all the problems which are looming this year (rising taxes, reduced services, frozen wages, mortgage payment increases, falling home values, rising unemployment, etc, etc). So I would be worried about a sharp change in sentiment as reality sinks in, and especially as the sort of news they are getting right now takes its toll on the morale of a people who were being told only yesterday that a substantial recovery was just round the corner. 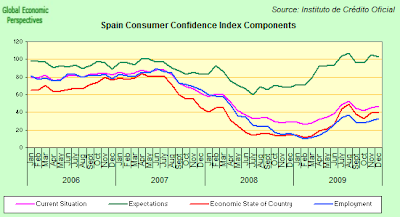 Which brings me to my latest podcast with Matthew Bennett (here).

During the podcast we cover four broad areas: demograhpics and the need for exports to take over from internal demand, internal devaluation and how it will affect Spain, Zapatero and â€˜solidarityâ€˜ and the need for a structured immigration plan in Spain. In particuar we talk about the recent controvery surrounding immigrant registration in Vic (Catalonia), about how Spain needs immigrants to safeguard the future of its economy, but that it is also important that there be jobs for immigrants to come to – thus returning the economy to growth, attaining employment growth and carrying through the internal devaluation are all interconnected, and relate to the sustainability of Spain’s external debt and pensions system in the longer term. Given this it is important the immigration process in Spain be much more structured in the future, and more in harmony with the requirements with Spain’s European agreements under the Lisbon Treaty.

We also talk about how a lot of this debate is rather theoretical at this point, since the migrant flows are currently inverting (and thus following the capital flows with a time lag – see chart below). If current trends continue (and Spain doesn’t start to create employment soon) the total number of immigrants in Spain will start to decline. Also, young Spanish people will soon start to leave in greater numbers in search of work elsewhere in Europe, or even farther afield. We are thus left with an additional question: would a smaller workforce manage to pay for pensions and â€™solidarityâ€™ after internal devaluation if the population drops? 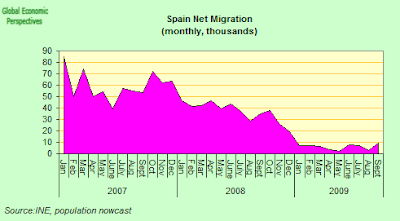 Spain’s current account deficit stood at EUR 4.67 billion in November compared to EUR 4.15 billion in October, but down from the EUR 8.56 billion deficit of a year ago, according to Bank of Spain data out today.

The goods trade balance showed a deficit of EUR 4.40 billion in November, up from EUR 3.4 billion in October, but narrower than the EUR 5.52 billion deficit a year earlier. On the other hand, the services account logged a surplus of EUR 1.36 billion, down from EUR 2.56 billion in October, and down from EUR 1.69 billion a year ago. Basically, as we can see from the chart below, after closing quite dramatically in the first half of the year, the deficit has been opening up again of late. 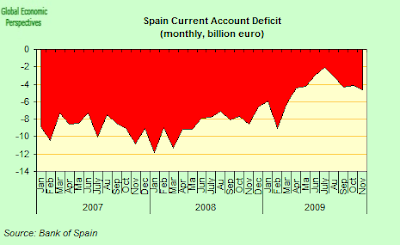 The reason for this is not hard to understand, it is due to the increase in government spending and debt, which is stepping in and filling a hole left by private demand. 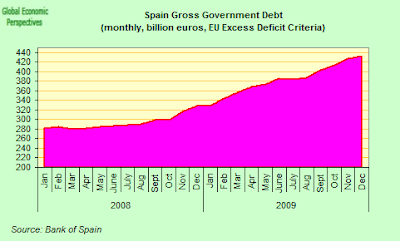 And this spending has been essentially funded by massive lending to Spanish banks from the ECB. 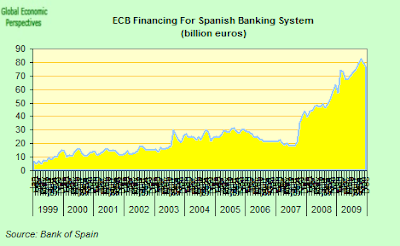 The reason the money is being spent on imports, and the current account is deteriorating is simple: Spanish domestic suppliers are simply not competitive. As we can see in this comparative Real Exchange Rate chart below – provided by BNP Paribas – current virtual exchange rates suggest Ireland and Spain are operating at a higher effective euro rate than Greece, and even more worryingly, the Greek and Spanish rates are continuing to diverge from the German ones. That is, in these two countries, no correction of the accumulated distortions is taking place. 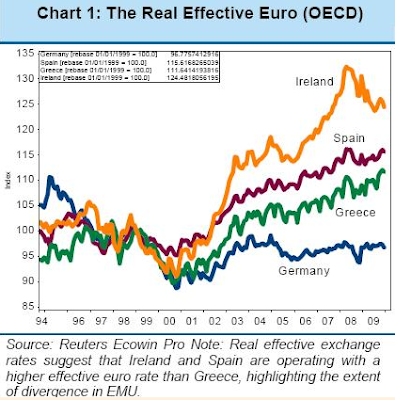 Spain, Latvia and Greece Affirm Their Commitment To The Eurozone

Sometimes images and gestures speak louder than words, and this photo (see below) from yesterday’s Davos session of the leaders of three of Europeâ€™s most economically troubled countries stating that the financial crisis had only solidified their commitment to the euro, as they pledged to make budget cuts and other changes in order to ensure their continued membership (or in Latvia’s case their possible entry) tells it all. It is evident that Greece and Spain need to stay in the Eurozone, what is not clear at this stage is how far the leaders of France and Germany are going to go to help them do this. A photo of Sarkozy and Merkel with Jean Claude Trichet might be more convincing at this point. 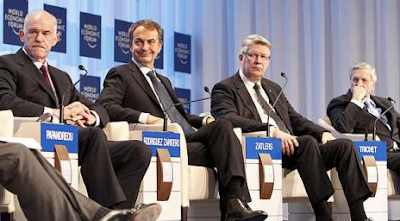 And again, there is what they actually said. Despite the admission by BBVA President Francisco GonzÃ¡lez earlier in the week that the 325 billion euro zombie developer debt presented a major challenge for the Spanish banking system (and that they needed to now take the bull by the horns – this number is around 30% of Spanish GDP) Mr. Zapatero continued to insist to his Davos audience that Spain’s banks were among the healthiest in Europe, resting much of his argument that things in Spain aren’t as bad as they seem since Spainâ€™s debt to GDP was still comparatively low given that the budget deficit had been kept well within limits set by EU Treaty before the economic crisis. So what was significant was what he didn’t say, rather than what he actually said, like what would happen to Spanish debt levels if a major bank bailout did prove necessary.

He did concede however, that â€œSpain has to improve productivityâ€ (by the 10% mentioned in the recent report to the EU Commission perhaps?, and if so, over what time period) and that the country needed to make its economy more competitive. The example he gave of how his government plans to achieve this – by investing more in research and development – begins to look thinner and thinner with every passing day, and I would say that by this point it is close to threadbare. No wonder that while he is roundly smiling in the photo above, the other three participants (and especially M Trichet) are looking grim, and rather concered. Unfortunately, I doubt many in Spain will be joining Mr Zapatero in his cheer.

16 thoughts on “After Greece, and Portugal, Does Spain Come Next?”