Are carry trades back in vogue? With all the talk about second derivatives, equity rallies, and that “spring is finally here” feeling erupting into the market place the question is, I think, a natural one to ask. And naturally, I am not the only one who is asking it.

Actually, I think there is not a shadow of doubt that most of the serious FX punters out there are considering (or have already considered) whether it is not time once more to seriously consider moving into carry trades.

Now, it is probably a pretty good bet that if I am starting to talk about the return of any kind of market trend you are probably bound to have missed the boat on it from an investment point of view. Not that I am lagging behind the discourse or anything, but it is hard to escape the feeling that if the financial markets have, since mid February and up to the time of writing, sustained the longest equity rally (and associated low point in volatility) since the currnt crisis broke out, then it is entirely possible we are very close to a turning point. Danish fund manager Steen Jakobsen ended a recent post on a very ominous note warning that we may now have reached the biggest selling point this year, which naturally suggests that whatever juice there may be in carry trades, it must all have been squeezed out by now. Add to this that the two most favoured reads currently on Seeking Alpha of late both extol the imminent end of the current rally, and it definitely seems that the market bulls have their days numbered. Finally, there is the more technical and wonkish perspective in which John Kicklighter, Currency Strategist at DailyFx points out that risk appetite might be close to its peak.

On the other hand there have been some lone voices, who have steadily pointed to the interesting possibility of taking advantage of the current benign market conditions to dip your toes into the growing market for carry trades. Darrel Whitten points to the JPY as the classic funding currency and suggests to invest in high yielders such as the Real, the Lira and the Rand. Also Andy Abraham voices the potential for carry trades as volatility has gone down.

At this point it would probably be a good idea to point out that there are carry trades and then are … carry trades.

Ok, an explanation is needed I think. As most of you probably know, the carry exploits the non-existence of the uncovered interest rate parity which states that an interest differential between two currencies should be offset by the higher yielder depreciating vs. the low yielder. In fact, the carry trade in so far as it is pervasive will persistently disprove the UIP and exacerbate the deviation from the theoretical equilibrium. This is something which some authors have coined as self-reinforcing arbitrage BriÃ¨re and Drut (2009), Plantin and Shin (2008), and OrlÃ©an (1999). This also means that while you can always build your very own carry trade basket or engage in carry trade through money market instruments, there is bound to be a substantial agree of piggy-backing in the spot market. Basically, you only need to realize that low yielders can be modelled as a positive function of volatility Cairns et al. (2007) and negative function of equity returns or as I have shown, that equities can be modelled as negative beta assets to low yielders (see also, Kohler (2007)).

Essentially, it amounts to the same money being made on the same strategy, but the underlying investment narrative is very different. In the case of a pure carry trade, it is a strategic position whereas in the case of spot market piggy-backing, the investment narrative is bound to be more opportunistic and self-perpetuating in both directions. This also underpins the inevitable sharp reversals in this game which is something BriÃ¨re and Drut (2009) touch on when they show how carry trades tend to perform poorly in the context of crises whereas fundamental strategies (based on PPP) will outperform carry trades. I tend to agree, but I would simply add that for the intra-day trader the correlations and functional relationship are stronger in an environment with sharp volatility reversals (such as the current one). Of course and following once again BriÃ¨re and Drut (2009), they also cite sources to suggest that in times of rigorous pursuit of carry trades and thus deviation of the UIP, the FX market tends to exhibit disequilibria along the lines of other “fundamentals”. This suggests that reversals will be all the more substantial when they arise, but they will also be just that, reversals, and thus not deviations from what we might coin as carry trade fundamentals.

What About the Current Rally Then?

More specifically, what are those carry trade fundamentals? Despite the fact that whatever points we can derive from the current rally do not represent a solid scientific foundation, the ideas expressed above easily give rise to the following expression for the return of a low yielding funding currency.

Where Rfx is the return on a low yielding carry trade funder (e.g. USD/JPY quoted directly), vol is a measure of volatility (e.g. the Vix) and Re is the expected return on equities. It is important to note that this functional form only has merit in the context of crises and thus when volatility is relative high on a mean basis. This is to say that when the market experiences volatility above a given period average, the carry trade fundamentals strengthen. In terms of which equity index, it is worthwhile to think about the point I also mention in my paper derived from Zimmerman et al. (2003) that when volatility is high markets tend to be correlated to a higher degree than otherwise which in turn tends to diminish the benefits from diversification in exactly the period where investors need it the most. Moreover, Zimmerman et al. also show that down volatility is larger than up volatility which would further solidfy the relationship noted above.

With this in mind let us get some charts on the table and bearing in mind that we can’t really draw any conclusions from we still get a strong indicative result. 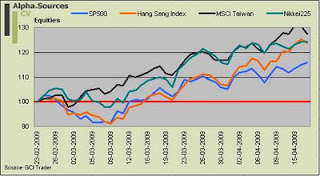 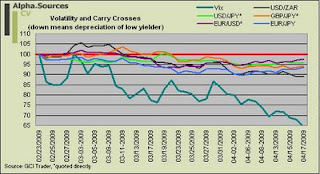 Even the untrained eye should be able to spot the proposed connection here (click for better viewing). If we look at the evolution in the market since end February (chosen because this is roughly where the Vix peaked), volatility has declined, the traditional carry crosses (mainly JPY here) have moved to favor the low yielder, and equities have bounced.

Of course, the devil is also very much in the detail here. Especially, the USD is interesting here since it shows us that this is never going to be a one way street. Currencies are thus relative prices and while the USD/JPY still seem, despite the almost equally low yields, to exhibit carry trade fundamentals the USD is also itself beginning to act like a funding currency not least against the Euro as well as against the Rand (and I would presume other EM higher yielders too). Clearly, there could be another explanation here, namely that of safe haven flows in times of a spike in volatility. Yet, I still think we need to consider the effect from the US’ credible commitment to inflate its way out of this issue and how Bernanke might be paving the way for, as some has mused, the mother of all carry trades. A colleague of mine pointed the following out recently during a discussion;

So the big issue is really whether all this excess liquidity will work its way out of the US – and into India, Brazil etc etc – as we move forward, especially since, if getting a recovery turns out to be as hard as everyone seems to think it is then the Fed (et al) are likely to be holding interest rates near to zero for quite some time, and all the saving people will be trying to do (with few genuine investment outlets) will mean that the last “savings glut” may turn out to look like very small beer, and “abundant liquidity” will be the name of the game.

Could we steadily see the introduction of a “cheap dollar policy”, you know, to keep all those exports flowing out, and keep the cost of servicing the US debt down for a while.

Now, apart from the rather ominous prospect of the US running a current account surplus which would mean a quite severe drainage of aggregate global demand, we need to ponder the effects of a regime of convergence towards QE among the developed economies and what this will mean for the carry trade. Stefan Karlsson had a reasonable go at explaining the link between weaker equities and low yielders a while back, but now the question begs as to what will happen once many of the major G7 economists go for QE. Perhaps it will be like Darrel Whitten noted that the flow of funds will simply move towards the EM to an even higher degree. But I would hold this to be true already in the sense that there will always be those who pursue the juicer trades out there which are bound to be demonstrably more risky than others. It will be interesting in this sense to see whether old relationships will hold regardless of the G7’s central banks inclination to go for very low interest rates.

The graphs above cover too short a period to merit any conclusion, but investors should be aware of the proposed relationship, when it reverses and then ultimately to quantify it. In essence the key here is to pin down the extent to which currency movements persistently move contrary to fundamental theories.

One of the best conceptualizations of the carry trade is still the Economist’s Buttonwood and his narration the instant gratification of carry trades and subsequently how investors were picking up dimes in front of an approaching steamroller. In terms of the immediate prospect of benefiting from carry trade, it is thus important to note that while a crisis such as the one we are experiencing at the moment certainly will tend to intensify many of the links through which carry trades manifest themselves, the reversals will also be more abrupt and unpredictable. Also we should never forget Macro Man and his pink flamingos. I am sure that despite my best efforts to pin down a theoretical and empirical relationship here, pink flamingos will be ever present.

On a more wonkish note, I am doing a thorough re-write of my paper on carry trade (see link below) which is based, in part, on the discussion above. I realize that although the empirical results of the original paper are fairly sound, the theoretical framework is quite poor. I, of course, won’t stand for that so will try to tidy this part up significantly as well as I am expanding the empirical investigation especially since the regressions in the full sample suffer from some, erm, statistical issues [1]. Stay Tuned.

As you can see from reading BriÃ¨re and Drut (2009), I have ripped parts of their list of references.

[1] Basically, the regressions suffer from heteroscedasticity in the full sample. This need not be a severe problem for the overall result since the f-stats and standard errors are large and correspondingly small. Also, I am not really interested in the full sample, but in parameter stability across two distinct periods. Pre crisis and post crisis. The problem arises here since the tests we have to check for parameter stability (Chow tests, dummy approach as well as the simple one) are of course sensitive to unequal variances in the chosen period intervals.