As noted by FT Alphaville the other day, the ECB has released its guidance for the use of Emergency Liquidity Assistance (ELA) by national central banks (NCBs) in the Eurosystem. Among the rules —

As a rule, NCBs inform the ECB of the details of any ELA operation, at the latest, within two business days after the operation was carried out. The information needs to include, at least, the following elements: …

the prudential supervisor’s assessment, over the short and medium term, of the liquidity position and solvency of the institution receiving the ELA, including the criteria used to come to a positive conclusion with respect to solvency;

Since Irish and Cypriot taxpayers have ended up on the hook for ELA provided to busted banks by their central banks, aren’t they entitled to now see this information?

Recall this AFOE post on the industrial politics of the abandoned BAE-EADS deal? Here’s an object lesson, from the Galileo navigation satellite system. The French were hugely keen on the project for political-military reasons and because they knew how to build it; the Germans wouldn’t pay into it unless they got to learn. Unfortunately they had a lot to learn and now the project is a mess and Thales is sending herds of engineers to Germany to fix the satellite. If we’re unlucky, the answer might be to smush the EADS Astrium and Thales-Alenia Space satellite operations together, which might leave us without the pretty impressive Italian and UK satellite industries but with the German company that just demonstrated it wasn’t much cop. 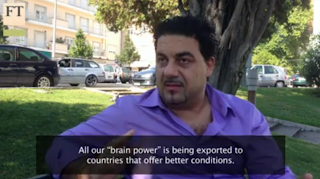 The above still comes from a recent Financial Times video entitled “Portugal’s Brain Drain”, which can be found here, and which I encourage everyone to watch. The issue being raised revolves around the current acceleration of emigration from countries on the EU periphery, largely towards the EU core. Typically the emigrants are young educated people who can’t find work. There is nothing especially surprising in this, since the tendency has long existed for people to move from more depressed areas to economically more dynamic ones. The exodus from Detroit in the United States immediately comes to mind. Or Scottish people getting on the bus to make the fateful journey from Edinburgh or Glasgow to London. The Schengen accord simply extends this process which used to take place within nation states to single market zones, or currency unions. But does this extension have consequences for the participating states which were not anticipated at the outset, and are these consequences all benign?

In addition, this time round in an important sense something is different since these movements are occurring in the context of a long and difficult economic adjustment, indeed one could almost argue that the people leaving form part of that adjustment. What’s more it is hard to accept that this is the kind of adjustment that countries like Spain and Portugal really need. Renovation in these countries implies these people and their talent are injected into the local economy to dynamise it, and not shot out the side like water from a high pressure hose with holes in it. So the big question I want to ask here is whether the economic programs which are being implemented in these countries take sufficient account of the demographic impacts they are inducing, and of the fact that the population loss involved – which most likely will become permanent – is going to cast a long shadow over the history of the countries concerned. END_OF_DOCUMENT_TOKEN_TO_BE_REPLACED