At the end of that war in 2006, I felt the cost of that more than I ever had. My marriage had fallen apart, I was away from my daughter, and I really didn't have a sense of having a home. And that was what was so important about being in Marjayoun and rebuilding the home. At its most elemental, it was about trying to find home, and in the end, I did.

From a very recent interview with the late Anthony Shadid, probably the best pure reporter of the 9/11 wars. Obituary here, along with an archive of his stories.

But Kavanagh's lengthy column managed to avoid naming to the Sun's readers a potential offence among those being investigated â€“ bribery of police officers.

Indeed. And I love the way the Guardian has stepped back from driving the hackgate revelations to keep the whole mery go round whirling with a few swift stiletto jabs. Anyway, as David Leigh makes clear itâ€™s not a case of victims being treated like criminals, but of alleged criminals becoming victims of circumstances they did their best to help create.  Item:

The Sun has always stood for the freedom of the entrepreneur to do as he sees fit with his own companies. What the entrepreneur sees fit to do in this case is to make an example of what he wishes others to believe is a rogue operation within his company.

The Sun has also been a tool for its parent companyâ€™s wider business interests, whether expressed through its political â€˜reportingâ€™, its relentless cross-promotion of Sky or its attacks on the bosses competitors. It is now in the interests of the wider business to serve the Sun up on a plate.

The Sun has always stood for robust policing. Until, apparently, it was applied to its own hacks. Additionally, the Sun likes spectacular policing, of the kind that provides good copy and that demonstrates Something Is Being Done. Something like a multiple dawn raid pile in, for instance.

The Sun has always believed in the American alliance. Now itâ€™s finding out in microvcosm the truth of Bismarckâ€™s remark that every alliance consists of two partners: a stronger one and a weaker one.

The actual circumstances of the raid on the Sunâ€™s hacks may be up for debate. I think theyâ€™re pretty standard for todayâ€™s exciting world of high profile send a message coppering, but that may be because Iâ€™m a bit too used to living in the kind of authoritarian pro-business society that the Sun has always campaigned for. This is also why Iâ€™m a bit baffled by the people who seem to think that weâ€™ll â€˜lose somethingâ€™ when it goes. 'What will remain' is the problem.

More generally, it does look like the Sun is done for. Apart from the fact that if the arrests continue its going to have difficulty getting out a paper thereâ€™s also the fact that no public official will want to talk to the paper right now: it makes them look dodgy. And those channels are what it needs to influence policy. Without them, itâ€™s just a shit sheet like the Star.

Quite astonishing but nonethless entirely unsurprising piece on McKinsey's role in guiding, structuring and writing Lansley's NHS Bill. It's not so much regulatory capture here as regulatory conquest: the whole service is being chopped up and offered round its clients like a tray of hors d'oevres. It should be said that the company got a lot of its forward operators in place under the last government. That was the reconnaissance. Now, the assault.

What I'm not clear about is why Cameron's put his political credibility on the line, not for ideological or populist reasons, but to ensure McKinely's bottom line. I think there's a general subtext here in that when the economy enters a long depression, securing lines of revenue from the taxpayer becomes a more important profit strategy for business.

The year got off on a much better foot than might have been expected, at least as far as global manufacturing is concerned.  As the JP Morgan report puts it:

“The global manufacturing sector continued to record belowtrend growth at the start of 2012. At 51.2 in January, the JPMorgan Global Manufacturing PMIâ„¢ rose to a sevenmonth high, but remained below its long-run average (51.8). Manufacturing output expanded for the second successive month in January, as new orders rose for the first time since last August”.

“The cyclically sensitive new orders-to-inventory ratio also moved higher, reaching a ten-month peak. Although rates of expansion for both output and new orders were the fastest since last June, they were still only modest at best. Growth of production was recorded in the US, Japan, Germany, the UK, India, Eastern-Europe, the Netherlands, Austria, Canada, Switzerland, Turkey, Brazil, South Africa and Denmark”.

“International trade volumes improved for the first time in six months during January. Growth of new export orders was led by India, the US and Turkey. China, Japan and the UK all reported modest increases, in contrast to the declines seen in the Eurozone, Russia, Canada, South Korea, Taiwan and Brazil”. 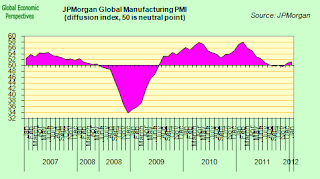