Henry Farrell has a post explaining many of the ins and outs of the upcoming (February 25) election in Ireland. Comments are good, too, if sometimes very insidery on Irish media.

It’s a sign of where things have gotten to in Ireland that the country has a number of options for producing a constitutional crisis.Â  In no particular order there are —

END_OF_DOCUMENT_TOKEN_TO_BE_REPLACED

Gentle readers,Â  as you are certainly aware, there have been a couple of technological advances since the first post was written by the fistful in September 2003. One of the most important of those has certainly been what is often called “the mobile web”. Since more and more people are consuming their news and reading blogs on mobile devices, I was wondering if there is a demand among you, gentle readers, to read this blog in the form of a native app for your favorite mobile operating system, or if you are still entirely ok with using the website or our RSS-feed.

So I created the following poll, which you can use to help decide that question.

But as to so many things, there may be a backend to the first question. So, if you answered “yes” in the first poll, it would be great if you could also indicate if you’d be ready to chip in for the added development costs (developer program participation, etc…), or not. For that, I’ve created the following poll.

Thanks for your help!

Want to do your bit for reducing the trade imbalances between the European centre and periphery? German Wikipedia’s Cabinet of Curiosities will exterminate all productive activity for a significant period of time. Spread it!

After a strange 3 days of deliberations within the ruling Fianna Fail party, political events in Dublin are moving quickly this evening.

END_OF_DOCUMENT_TOKEN_TO_BE_REPLACED

A certain idea of French foreign policy is in crisis. On one hand, a serious (non-dickhead) terrorist threat to French interests – like Areva’s uranium mines – in Niger and Mali just isn’t going away, and the French military is semi-permanently involved. Jean-Dominique Merchet has an excellent post on the failed operation to rescue the two hostages and especially on the fact that several of the apparent kidnappers were in Nigerien police uniform…and they fired at the French helicopters. Whether this was a case of insurgents masquerading as police, rogue police cooperating with insurgents, real police acting as fake ones for some twisted reason, or a disastrous friendly-fire incident is far from clear.

Further south, in Cote d’Ivoire, the political crisis grinds on with a steadily increasing background level of violence. The many, many French citizens present have been officially advised to leave. Well, perhaps that’s what Foreign Minister MichÃ©le Alliot-Marie meant to say – instead she advised them to return “en metropole”, thus giving the unhelpful impression she regards the place as a French colony. Oddly enough, former foreign minister and multiple-scandal case Roland Dumas, who is now one of Laurent Gbagbo’s lawyers, described it as “the jewel of French colonialism” in an interview with Le Monde. He went on to say that the water supply belonged to Bouygues, the oil to Total, and the port to BollorÃ©. Which is true. Typically, he left open whether he thinks this is a good thing or whether behaving as if the country was still a French colony might be a little irresponsible.

And not only did the Tunisian president, dictator, and friend of France end up fleeing, he was apparently refused entry to France. Actually, I monitored air movements over Corsica at the time thanks to this lot and I couldn’t find the plane (registration TS-IOO) – I rather suspect that even if he did apparently stop for fuel in Italy, he went straight east from there. The timings tend to support this. This was after Alliot-Marie, whose reputation as a safe pair of hands is looking dicey, had gone so far as to offer Ben Ali the assistance of the French police in dealing with the crowds. Seriously. In fact, looking at the exact wording, she may have meant some sort of low-key training team giving lessons on policing by consent, but the timing couldn’t have been less appropriate. Anyway, the minister ended up being formally disavowed by her own ministry.

What seems to be clear is that not only are there problems, but there is also an entirely unhelpful smell of imperial arrogance wafting about.

It would have been hard to believe only a few weeks ago that the euro zone could be the source of any good news let alone news to help push the market forward. Yet, with last week’s successful bond auctions and the pledge of international superpowers such as Japan and China to buy Euro zone debt and the ECB’s sudden more hawkish tones, the obvious question is; are we out the woods yet? END_OF_DOCUMENT_TOKEN_TO_BE_REPLACED

The developments are too rapid to have much considered to say but it seems clear that there are new features to this uprising.Â  The role of Wikileaks in showing that the US diplomats didn’t view the political economy of the place much differently than the people in the street.Â Â  Nor is this a “colour revolution” of the type from the mid 2000s — it’s not that organized or branded.Â  And for the first time in a long time, a decision for European and Arab governments about government legitimacy in their own backyard — and how to handle graceful retirement for the former incumbent.Â  At least two imponderables: the reaction of overseas Tunisians, who would have been forgiven for wondering if things would ever change, and the spillover to Egypt, where some of the political features are similar and succession is already, obliquely, in the air.

“If you know your Thucydides and the Melian dialogue you know that small countries rely most on everyone following the rules. That’s why we follow the rules. If there are no rules, then the big will do what they want,”
Estonian President Toomas Ilves in an interview with the EU observer

In a blog post which has gathered a certain notoriety, Paul Krugman recently sent the Estonians his condolences. I will send them, not my condolences, but my congratulations, and these not for the somewhat dubious honour of being allowed to join the Eurozone, or even for having carried out a highly successful “internal devaluation” (this outcome is still in doubt), but rather for their stubborness, courage and tenacity. These are indeed hard (and enduring) men and women. And in honour of their courage I offer them a homage, in the form of two charts. The first of these is the latest Estonian industrial production one. 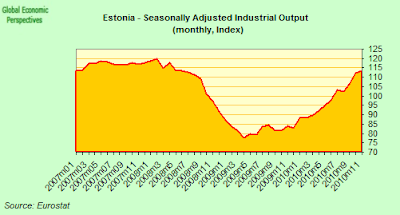 While the second is the Spanish equivalent. 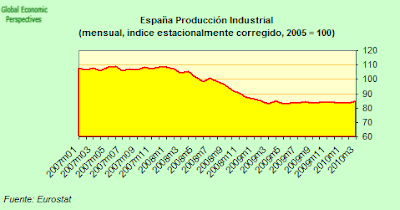 END_OF_DOCUMENT_TOKEN_TO_BE_REPLACED

Undemanding reading, with one or two exceptions, appears as the hallmark of 2010. Belated reaction to the economic crisis? Lack of initiative after spending several months with Count Tolstoy in 2009? Hard to say.

The exceptions: Armenian Golgotha by Grigoris Balakian, a survivor’s testimony from the time of his arrest in 1915 in Istanbul to his eventual escape into Central Europe in 1918; and in a completely different vein The Mists of Avalon by Marion Zimmer Bradley, a retelling of Arthurian legends with the Grail quest a nuisance, all of the swordplay off-stage, and the men in general of secondary interest.

Most-read author this year just passed: Alexander McCall Smith. Authors new to me I want to read more of: John Biggins, Raymond E. Feist, Jo Walton, Hillary Mantel. Books read aloud to the eldest child: should be obvious from context. Best tale of the Austro-Hungarian navy: Tomorrow the World by John Biggins. Disappointment from a Nobelist I otherwise quite like: The Museum of Innocence by Orhan Pamuk. Best novel of first contact in medieval Germany: Eifelheim by Michael Flynn. Books in German read: none, for the first time in many years.