Over the next few years, [Kashgar] city officials say, they will demolish at least 85 percent of [the city’s Old Town, a] warren of picturesque, if run-down homes and shops. Many of its 13,000 families, Muslims from a Turkic ethnic group called the Uighurs (pronounced WEE-gurs), will be moved.

Why couldn’t Susan Boyle be in the Eurovision Song Contest?

This is one of the key points I have been hammering here on this blog for some weeks now. There is clear evidence of most economies globally “stabilising” at this point, you could even stretch it to say that the “worst is over” – since I doubt we will go back to the dreadful days of December and January (see German manufacturing PMI chart below) – when it was like someone had given a very sharp knock to the whole industrial sector with a large sledgehammer, and of course ultimately the vibrations settle down even if the damage remains. 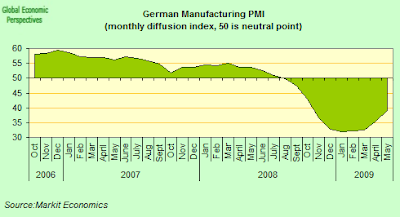 END_OF_DOCUMENT_TOKEN_TO_BE_REPLACED

Even when liars tell the truth, they are never believed. The liar will lie once, twice, and then perish when he tells the truth.

One thing which is certain at the moment is that the rumour mill is grinding hard and that it is very difficult to get a clear picture of what is going on. It is too cumbersome for me to go into the entire background here (I assume most of you are familiar with the Baltic and CEE situation), but if you want some background try this or this which will give you the opportunity to browse a myriad of articles. The situation is however pretty simple. Ever since it became clear that the Baltics was going to suffer not only a hard landing, but a veritable collapse on the back of the financial crisis one obvious question always was whether these economies could maintain the Euro peg throughout the correction process. END_OF_DOCUMENT_TOKEN_TO_BE_REPLACED

Danske Bank has issued the following advice to investors:

The event risk has risen sharply in the Baltic markets and we advise utmost caution. Yesterday, the Swedish central bank Riksbanken said it will increase its currency reserve by SEK 100 bn through a loan from the Swedish debt agency. Investors seem to believe that this is a buffer to deal with potential problems arising from the Baltic crisis.

The krona fell for a third day after the Riksbank announced the loan, and declined more than any of the 16 most-traded currencies against the dollar and the euro. Stefan Ingves, central bank governor, said in the statement that the financial crisis may be â€œprolongedâ€. Since the start of the financial crisis, Sweden has spent 100 billion kronor on swap agreements with Iceland, Estonia and Latvia and on dollar injections into Swedend’s financial system.

Latvia has already spent over 500 million euros buying lats this year to support the currency.

The jury is still out on whether Latvia can do what it takes to rebalance its budget and qualify for the bailout money it received from the International Monetary Fund and the European Union. Take a look at this analysis of Latviaâ€™s situation from Danske Bank, which has consistently offered hard-headed â€“ that is, pessimistic â€“ views of the Baltic nations of Latvia, Lithuania and Estonia. (The bank was also far ahead in calling the disaster in Iceland.)

The most interesting aspect of the story, from a global perspective, was the notion that a default â€” even by a small country â€” could trigger a cascade of bad news at a time when the financial situation appears to be easing.

Let us just all hope that this last mentioned “notion” remains just that, “an interesting notion”.

Meanwhile, Swedish media seem to be treating the devaluation as almost a “fait accompli” – those of you who don’t speak Swedish can try putting this and this through your Google translator if you are interested.

Rendard Sexton, writing at fivethiryeight, offers a handy intro to next month’s elections to the European Parliament. The comments are well informed and also offer corrections to minor missteps in the post.

For aficionados, the main value is a link to efforts from a global communications company to forecast the outcome. The short version: little difference from the EP elected in 2004, with the biggest changes coming within coalitions rather than between them. Conservatives plus liberals will be enough to elect the next president of the commission, unless the liberals switch sides, in which case the whole of the left plus liberals and greens will be needed. A bit like Germany, actually.

Whether you see the current “stabilisation phase” as merely temporary or a sign of something more durable, it is hard to escape the feeling that as the discourse on green shoots and second derivatives lingers we seem to be entering a new leg of this crisis. Since, make no mistake about it, as far as the so-called OECD developed economies go, we are very much still stuck in the mire and it is difficult to see where any speedy recovery is going to come from.

On the other hand the “world and all that is the case” is not completely exhausted by the perimeters of these selfsame countries, and it is exactly the potential for an asymmetric “recovery” and how global monetary policy might serve to transmit such a recovery which is the topic of this entry. END_OF_DOCUMENT_TOKEN_TO_BE_REPLACED

This sounds like something straight from the Argentine history book. Yesterday someone left this comment on my Latvian Blog:

By the way, latest idea in Latvia is to issue vouchers as a substitute to LVL (thats in case Latvia doesnt get any money from IMF). So if you work in public sector, your salary partly will be paid in vouchers which you can use to buy food. And yes – it would also mean ‘stable’ LVL, at least on paper. I still don’t really understand how it could possibly work in free capitalist economy. But it underlines how strong is the will to keep current LVL rate at any means, even if it means total collapse.

At the time I wasn’t sure what to make of this, but then I saw that according to a report in the Latvian newspaper Diena, Central Bank Governor Ilmars Rimsevics visited the town of Liepaja on Friday, and told the astounded journalists assembeled there that: “The level of the expenditure shock we are receiving is so high that we can not cease to maintain this quantity of expenditure. So there is a shortage of funds, and we’re forced to look at the different kinds of projects, which can help us provide for the foreseeable future. Taking into account that the money is not budgeted, it can be emitted in vouchers”.

Rimsevics also gave an interview to the Russian-language newspaper Telegraf (published this morning) where he says more or less the same thing. Basically, the IMF are threatening to withold the next round of funding if the Latvian government does not move ahead with the agreed wave of budget cuts – which in some areas will be of up to 40%. Latvia received a 7.5 billion-euro bailout from the IMF and the European Commission last December. The agreement required Latvia to limit its budget shortfall to to 5 percent of gross domestic product. Since then, the economic outlook has turned far worse than anticipated and Prime Minister Valdis Dombrovskis’s government is seeking approval to run a 7 percent deficit.

At the same time the Latvian central bank keeps having to buy the local currency (the Lat) to support the euro peg – last week the bank bought 6.4 million lati ($12 million), and this was the eighth consecutive week they have had to make such purchases. The longer it takes to reach agreement with the IMF – who are convinced that severe budget cuts will be expansionary in the short term (due to the improved confidence they will produce, see here), the more the bank will need to spend to counter those who are betting they will be forced to devalue.

The bank have now bought about 1.1 billion lati since September 2008, and such interventions have reduced Latviaâ€™s foreign currency reserves by 36.7 percent compared with September last year. The flight to euros is also producing strong liquidity pressure inside the country, and the central bank cut its refinance rate to 4 percent on May 13, the second reduction so far this year, in an attempt to boost borrowing amid a liquidity squeeze and much harsher lending criteria. Basically, in order to keep lati in circulation, interest rates on the Rigibor, the local interbank lending market, have been driven up by 42 percent since 3 February to hit 13.7 percent on May 14 (for six-month loans). And this in an economy which shrank by 18 percent in the first quarter.

As I say at the start, all this – including the vouchers proposal – does now sound incredibly like Argentina, since issuing scrip money is exactly the kind of thing you get pushed into when you try unrealistically to hold a peg. It is the begininning of the end. The same thing, exactly, happened in Argentina, where they ran out of pesos and started to issue PatacÃ³nes, Lecops, CrÃ©ditos,Argentinos and a myriad of other exotic bits and pieces of scrip. I give a bit of background on all this in this post on my Spanish blog, while Bloomberg’s Aaron Eglitis has a useful summary of the general Latvian situation here.

We seem to be witnessing the arrival of some kind of new financial orthodoxy. The IMF put it like this in the Hungary Standby Loan Report (which by chance I was reading last night):

In emerging market countries with debt overhangs, the â€œKeynesianâ€ effect of fiscal adjustment is likely to be outweighed by â€œnon-Keynesianâ€ effects related to expectations and credibility. Non- Keynesian effects have to do with the offsetting response of private saving to policy-related changes in public saving. In particular, if fiscal adjustment credibly signals improved public sector solvency, a fiscal contraction could turn out to be expansionary, as private consumption rises based on the view that future tax hikes will be smaller than previously envisaged.
IMF – Hungary, Request for Stand-By Arrangement, November 4, 2008

So from Tallinin, to Riga, to Budapest, to Bucharest, the same sonata on a single note is being played, and the message is cut spending and you will expand. Funny how people are not very convinced about this idea in Berlin, London, or Washington. END_OF_DOCUMENT_TOKEN_TO_BE_REPLACED