You know, one of the things which amazes me about the present discourse surrounding the crisis is the way people seem to trot out all the old formulae, without giving a moments though to what they actually mean. “In the long run we are all dead” is an obvious case in point. Who really stops for long enough nowadays to think about what Keynes was actually getting at? “Animal Spirits” would be another. END_OF_DOCUMENT_TOKEN_TO_BE_REPLACED

On Serbia. Or, as it was then, Yugoslavia.

The Kosovo War has been debated, God knows, enough times. Still, a couple of things. One is this interesting article from the always-worth-reading Nenad Pejic. (Favorite line: “the official speeches spend all their time remembering that Serbia was bombed but never mention why Serbia was bombed.”) This bit was particularly interesting IMO:

Mladic remains at large and Serbia remains in denial about the massacre of Bosnian Muslims at Srebrenica. Schoolchildren are taught about crimes committed against Serbs, but not about crimes committed by Serbs. This policy of denial has created an alarming situation among young Serbs. A 2007 poll of youths found that more than 30 percent say “there is no need” to be acquainted with ethnic Albanians. Fifty percent think the Cyrillic alphabet should be given preference to the Latin alphabet. Twenty-five percent “cannot imagine” having sex with a member of another ethnic group, and 20 percent expressed a desire to live in an ethnically pure state. It is unlikely these figures have improved since the poll was taken.

To be fair, I should say it is likely the responses would be similar among ethnic-Albanian youths in Kosovo. I shudder to think what these attitudes mean for the region when this generation takes over political power.

END_OF_DOCUMENT_TOKEN_TO_BE_REPLACED

After spending a bit of time recently in the various battlefields and cemeteries of Flanders, this topic has been much on my mind. It’s one of those simple but non-obvious military ideas that explains a lot more than you’d expect. Basically, the culminating point is the furthest that the attacker can go while still remaining superior to the defender. From the attacker’s point of view, you need to plan to reach your objective before you hit the culminating point, while the defender wants to do one of two things: bring the culminating point forward or move the objective backward, in order to be able to counterattack against an inferior attacker.

Which is all very dry and rather tricky to follow. END_OF_DOCUMENT_TOKEN_TO_BE_REPLACED

The response to yesterday’s no-confidence vote in the Czech government, holder of the EU Council Presidency, was a standard “move along folks, nothing to see here”.Â  Normal service would not be interrupted, the remaining 3 months of the Presidency would continue, and the grip-and-grin festival with Barack Obama next week would continue as before.

That was presumably before the lame duck PM Mirek TopolÃ¡nek’s bizarre speech to the European Parliament today, which is going to go down like a lead balloon in Washington (and probably London too) —

END_OF_DOCUMENT_TOKEN_TO_BE_REPLACED

On April 9, 1989, Soviet troops put down a demonstration in Tbilisi calling for the restoration of Georgian independence. As Thomas Goltz puts it in Georgia Diary:

This time, however, the local garrison of Soviet army conscripts usually called upon to maintain order was replaced by paratroopers, and when they moved against the sea of unarmed protestors, their weapons of choice and coercion were shovels. Nineteen protestors were bludgeoned to death, and many more seriously injured.

For the 20th anniversary, the opposition is making a substantial push to oust president Sakaashvili, whose term would otherwise run through 2013.

In general, transition countries are better served if governments and high officials are only turned out of office by legal and constitutional means. It took the Slovaks some time to get rid of Meciar, and the Romanians to get rid of Iliescu, but their institutions are stronger for having done so within the regular framework of the state.

On the other hand, the war with Russia last year was a colossal blunder on the part of Saakashvili’s government, the kind that would bring down a leader in a purely parliamentary system. Further, more post-communist states started out with reasonably strong presidencies than ended up with them. Poland, for example, initially gave the president strong powers and in particular the right of co-determination of crucial ministries such as defense and foreign affairs. (This led to several crises during Lech Walesa’s time in office.) In general, the trend across Central and Eastern Europe has been for increasingly assertive parliaments to erode the powers of the presidents. That tendency would also argue for parliament to work on sidelining Saakashvili.

The president and his allies, who still command a majority in parliament, are not about to stand down. And the opposition is working to heat things up. I’m skeptical that Georgia will see a change of government in the next month, but the political temperature is definitely rising.

Good local coverage in English is at Civil.ge. [Update: Their site does not seem to play nicely with Firefox.]
END_OF_DOCUMENT_TOKEN_TO_BE_REPLACED

The coalition led by Mirek Topolanek was forced out of power last night after losing a confidence vote in parliament, 101-96, over its handling of the economy.

Off the top of my head, I can’t think of another time in the last 10 years that a government has fallen while it held the EU presidency. Given the present rotation, the Czechs won’t get another chance until the 2020s. Oops.

Topolanek will stay on as a caretaker until Czech President Vaclav Klaus names a new prime minister who can assemble a working coalition in parliament. If three attempts to form a government fail, early elections must be called. What a mess!

Japanâ€™s exports fell by a record 49.4 percent in February as deepening recessions in the U.S. and Europe, and a sharp slowdown in China hit demand for Japanese products around the globe. Shipments to the U.S., still Japanâ€™s biggest market, dropped an unprecedented 58.4 percent from a year earlier. Car exports were down 70.9 percent. This follows January’s year on year drop of 45.7%. 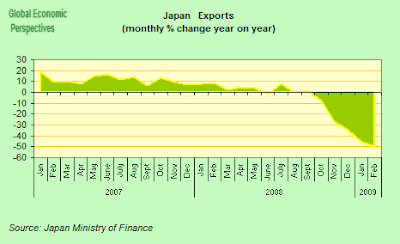 Februaryâ€™s drop in exports was the greatest since at least 1980, when the government started to keep comparable data.

Japan’s ageing population and workforce has lead it to become increasingly reliant on exports for GDP growth, as consumer demand stagnates internally. Japan is thus especially sensitive to changes in world trade patterns, and with the World Trade Organization forecasting trade will shrink 9 percent this year (the most since World War II) Japan looks especially vulnerable. During Japanâ€™s expansion of 2002 to 2007, exports rose as a portion of GDP to 15.6 percent from 10.4 percent.

And it isn’t only Japan which will be affected by this, since imports were down by 43%, and of course China is quite dependent on exports it sends to Japan. END_OF_DOCUMENT_TOKEN_TO_BE_REPLACED

The Wall Street Journal (subs. req’d) says that Romania will announce that it is receiving a $26 billion aid package, with 2/3 of the money coming from the IMF and the rest from European institutions and the World Bank.

END_OF_DOCUMENT_TOKEN_TO_BE_REPLACED

Though it does have some relevance to the financial crisis, a brief item from the gentleman who brought you the immensely useful crazification factor:

There are two novels that can change a bookish fourteen-year old’s life: The Lord of the Rings and Atlas Shrugged. One is a childish fantasy that often engenders a lifelong obsession with its unbelievable heroes, leading to an emotionally stunted, socially crippled adulthood, unable to deal with the real world. The other, of course, involves orcs.

News from Russia’s crisis stricken economy has certainly been a lot less dramatic of late, but even as Finance Minister Alexei Kudrin seeks to reassure us that everything is coming back under control and that lending in the Russian economy is “in full swing” once more, doubts remain. Are we simply seeing the temporary impact of all those stimulus measures that have been put into place, or is a more general recovery possible at this point?

Certainly if we come to look at the purchasing managers indexes we can see that things were better in February than in January. The VTB services index rose to 40 in February from 36.8 in January, although since any reading under 50 indicates contraction, it is clear that Russia’s services industries are still shrinking at a pretty hefty rate. 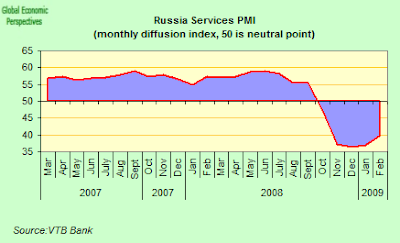 The manufacturing PMI also improved slightly, rising to 40,6 from January’s record low of 34.4. 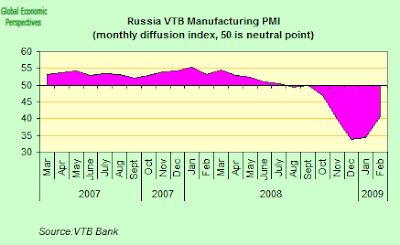