The world my children (one, three and five) remember will always be one in which a black person has been President of the United States of America.

Some of us had an early start to the week in Brussels, with Turkish Prime Minister Recep Tayyip ErdoÄŸan addressing a breakfast meeting of the European Policy Centre in the swanky surroundings of the Conrad Hotel, accompanied both by his new EU chief negotiator, Egemen BaÄŸÄ±ÅŸ, and the outgoing EU negotiator, foreign minister Ali Babacan. It was a significant event, ErdoÄŸan’s first appearance in Brussels since the EU summit of December 2004; he had paved the way with a speech to Turkish immigrants in Hasselt the previous evening, appealing to them to integrate into their new homes, which got rather good coverage in the Belgian press. The audience was generally sympathetic (most Brussels insiders are in favour of Turkish membership of the EU, whatever one may hear from the French and Austrians).

END_OF_DOCUMENT_TOKEN_TO_BE_REPLACED

“They said our sights were set too high. They said this country was too divided, too disillusioned to ever come together around a common purpose. But on this January night, at this defining moment in history, you have done what the cynics said we couldn’t do. … You have done what America can do in this new year, 2008.” – Barack Obama, January 3, 2008, on winning the Democratic Iowa caucuses

Well it’s pretty clear to me at least that there is now one, and only one, major and outsanding topic towering head and shoulders above all those other pressing and important problems those of us following the EU economies currently find lying in our macro-policy in-trays: the issue of wage cuts. Not since the 1930s has the possibility of such a generalised reduction in wages and living standards loomed out there before policymakers, and doubly so if we now hit – as I fear we may well for reasons to be explained at the end of this post – systematic price deflation in a number of core European economies.

The issue that has suddenly and even violently erupted onto the European macro horizon over the last week (as if we didn’t already have sufficient problems to be getting on with) is, quite simply, how, if they either don’t want to, or can’t, devalue, do politicians successfully go about the business of persuading the people who, at the end of the day, vote them into office (or don’t) to swallow a series of large and significant wage cuts? And this is no idle and abstract theoretical problem, since in the space of the last week alone the issue has raised its ugly head in at least four EU member states – Ireland, Greece, Latvia and Hungary.

In the case of the first two of these devaluation simply isn’t an option, since there is no a local currency to devalue, while in the case of the latter two the presence of prior large scale foreign currency borrowing means that authorities are nervous about anything that smacks of devaluation (since the providing banks would take large losses following the inevitable defaults, and the cooperation of these providing banks is necessary in the future if the economies in question are ever to recover). This latter view (no devaluation) prevails even though many economists, (including myself), would argue that is a highly questionable one, since wage deflation on a sufficient scale will ultimately produce those very same defaults (with the added schadenfreude, as Paul Krugman points out, that even those who have borrowed in the domestic currency are also pushed into default). END_OF_DOCUMENT_TOKEN_TO_BE_REPLACED

Credit Rating agency Standard & Poorâ€™s announced this morning that it was cutting Spainâ€™s AAA long-term sovereign rating to AA+. The euro fell to a session low of $1.3217 from around $1.3278 after the news was announced, while the yield spread between 10 year Spanish bonds and German Bunds held steady around 114 basis points following the downgrade after rising earlier to a record 122.

Fuller background on all this can be found here.

“This Land is Your Land”
Verses four and five, as performed at the pre-inaugural concert:

A great high wall there tried to stop me
A great big sign there said “Private Property”
But on the other side …. it didn’t say nothin!
That side was made for you and me!

Update: HBO has put up a sign on the video saying “Private Property”. Search YouTube for Seeger and Obama; I found half a dozen or more. This song is made for you and me.

He should have turned 80 last week.

On the other hand, he came within a sneeze of dying after being stabbed in 1961, and he achieved a thing or two in those seven years.

Normblog – ‘the weblog of Norman Geras’ – is often quite good and I read it when I get the chance, but this recent post of his was pretty bad. Norman says that those who, like Shirley Williams, dislike the phrase ‘war on terror’ have “trouble coming up with compelling reasons for their dislike” of that phrase.

Specifically, Norman argues, crime is not exclusively a civil affair: actions against criminals may include actions of war. I think Norman’s making some sort of synecdochal error here. Wars are always fought between political entities and hence in a war there are always multiple actors – both leaders and followers – on both sides. This has major implications for considerations of criminality and legitimacy.

All actors in a war (it’s assumed) are willing to use violence; that is to do, in wartime, things which in peacetime would be considered criminal. This said, some may do things which even in the special circumstances of war will be considered criminal. These are war criminals, and they may well include the leaders of a side. Other war leaders may be considered criminal for things they did before war explicitly began. Perhaps their involvement in starting war is their crime. Nonetheless, when you’re fighting a war leader (criminal or otherwise) you’re very likely not fighting him in person; you’re fighting his army. Your opposition to Tojo, say, may be founded in his criminality but your use of violence is legitimised by the fact that millions on Tojo’s side – some of whom won’t ever be thought criminal – present a threat to you which can only be countered by use of violence. After all, if it were just Tojo, you’d send in the police. The police can’t get to Tojo because of his army? Frustrating, yes, but not in itself justification for violence.

And so – the standard criticism goes – use of the phrase ‘war on terror’ suggests that we are under threat in a way which justifies violence, as in a war. If we disagree that this is so, then naturally we won’t want to hear the phrase ‘war on terror’ used in political discourse by way of presenting options for action. Our situation has been described incorrectly. The ‘war on terror’ is only a metaphor? (I think Norman has been misled by this one, somehow.) Maybe. But then, I can take it, so is the call to send in the air force. Count me with Shirley Williams.

This post is partly about Russia, partly about how to follow the present economic crisis on a day to day basis and partly methodological.

So Which Are The Worst Affected Countries In The Present Crisis?

Obviously the simple answer to this question is “all of them”, and in particular all those countries who are members of the OECD. Perhaps that is the feature which best defines what is happening this time round (and which separates our present problems from, say, the Asian crisis in 1998) since this is a crisis whose focus has been, and still is, in what are often termed “the advanced industrial” economies, even though some of these are now more services than manufacturing-industry driven. But, come-on, within that ever so long list – which includes each and every member of the OECD (and a goodly number of those who aren’t) – who exactly are going to be the worst affected?

Well I don’t think I have made any secret on this blog that I think the principal focus of the present crisis is now situated in what Paul Krugman call’s Europe’s periphery – by which I would mean Central and Eastern Europe, Southern Europe, Ireland and the UK. To that list I would simply add those economies who are largely export driven, and who thus suffer most directly from the sharp contraction in global trade. In particular here Germany, Japan and China. My principal guess is that China is really going to be one of the worst case scenarious, and that consensus thinking still has some way to go in catching up with events here. Hong Kong based UOBKayHian have a Q4 estimate for year on year Chinese GDP growth of 6.3% for China (see here), and I think few people other than professional macro economists and bank analysts (and far from all of these if the truth be told) really realise what this means – it means the quarter on quarter rate of expansion was very low indeed, possibly verging on the negative. I’m guessing but it must have been somewhere in an annualised 0 to 2% range. This means we may well see quarter on quarter negative growth in 2009 in China, and that the possibility of a technical recession of two consecutive quarters of negative growth must be over 50% at this point. It wasn’t so long ago that the consensus was saying that annual GDP growth which was as high as 6% would be tantamount to a recession! END_OF_DOCUMENT_TOKEN_TO_BE_REPLACED

The German economy is about to suffer its deepest recession since World War II according to economics Minister Michael Glos speaking in an interview with the German newspaper Welt am Sonntag due to be published tomorrow (Sunday). Glos said growth in Europe’s largest economy is now expected to drop by as much as 2.5 percent this year (and there is still downside risk here). Earlier government estimates had been for slight positive growth (0.2 percent). This suggests that the miracle export-driven-recovery in German economic performance that so many were enthusing about in 2007 has actually been a short lived, one-off, affair, driven largely by an unsustainable lending boom in the UK, and Southern and Eastern Europe. If we take as good this year’s government estimate, it gives us average growth for the German economy over the last 10 years of 1.07%, hardly changed from the supposedly “correctional” pace attained between 1995 and 2005 (see chart below) – or is Germany’s lost decade now surreptitiously going to convert itself (like its Japanese equivalent) into the lost decade and a half? 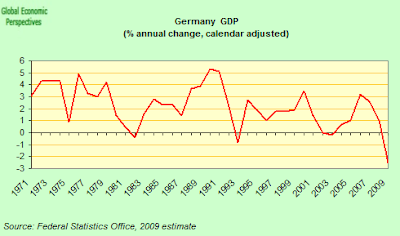 Germany’s economy started contracting in the second quarter of 2008, and went officially into recession in third quarter. Further the Federal Statistical Office estimated this week that the economy may have shrunk quarter on quarter by as much as 2 percent in the fourth quarter (ie at an annual contraction rate of 8%), and that annual growth for 2008 may have been as low as 1.3 percent (non calendar adjusted – 1% calendar adjusted) – about half the 2007 level. 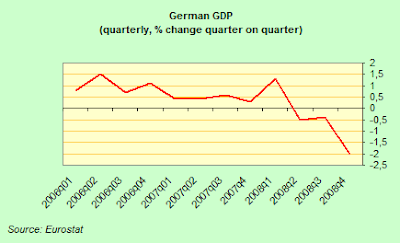