State handouts cannot continue indefinitely, not least because reserves no longer cover total foreign liabilities: on the basis total debt was US$540bn at the end of September 2008, and that US$73bn was repaid in the fourth quarter, total debt is now US$467bn and private-sector debt US$425bn. Russia entered the crisis with the worldâ€™s third largest cache of central bank reserves, but it has been dwindling at an accelerating pace. By mid-January, reserves had declined to just below US$400bn, meaning that more than a third of the total was spent over the past five months.

The International Labour Organization forecast this week that as many as 51 million jobs could be lost worldwide in 2009 due to the global economic crisis. But if I look at some of the numbers hitting my desk this week, even this estimate cound prove to be a conservative one.

Here in the EU, the most striking case is of course Spain, where unemployment hit 14.4% of the labour force in December. But perhaps the more significant developments are taking place at the moment in Germany, where the massive jobs machine evidently changed course in November, and where the seasonally unadjusted number of unemployed rose by 387,000 in December. Perhaps the chart which makes what is now happening in Germany clearest is the one below for employment creation, where we can see that the rate of new employment generation started to decline in the summer, and the line downwards is more or less constant, so while employment was still up year on year in November, it will soon turn negative, and will remain so for some considerable time to come. 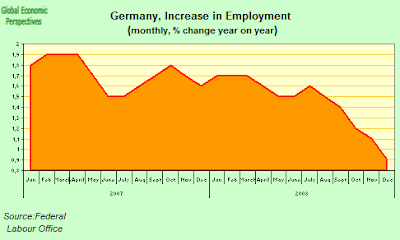 In the United States the number of people staying on state jobless benefit rolls after drawing an initial week of aid jumped 159,000 to 4.78 million in the week ended January 17.

So, while I have no exact idea of what the total job loss in December was globally, I am sure it was a large number, and I am also sure that if things continue at this pace, 51 million losses over the whole of 2009 will turn out to have been an optimistic estimate. The point is, of course, that these job losses are simply a noose which serves to further tighten the grip of the global recession, as less workers means less spending, and less spending means even less workers, and down and down we go in circular fashion, for the time being at least.

Indeed the 51 million estimate for the whole of 2009 is already looking on the low side. Chen Xiwen, director of the Office of Central Rural Work Leading Group estimated this week that more than 20m rural migrant workers in China have already lost their jobs and returned to their home villages or towns as a result of the global economic crisis, and by the start of the Chinese new year festival on January 25, 15.3 per cent of Chinaâ€™s 130m migrant workers had lost their jobs and left coastal manufacturing centres to return home, according to data from the agriculture ministry survey.

Spain’s economy is now most evidently, and totally and completely officially, in its first recession since 1993. The final confirmation of this came yesterday when the Bank of Spain released its quarterly report on the Spanish economy. According to the bank, gross domestic product fell by 1.1% in the final quarter of 2008 (over the previous quarter), following a 0.2% decline in the third quarter. GDP fell year on year by 0.8%.

END_OF_DOCUMENT_TOKEN_TO_BE_REPLACED

IMF Senior Regional Representative For Central Europe and the Baltics, Christoph Rosenberg, recently took me to task on RGE Monitor about my Latvian devaluation proposal (as did RGE’s own Mary Stokes), and I would like now to take a closer look at some of the points they raise. Beware, this is not for the faint of heart. It is evidently long, at times turgid, but very definitely, I would hope, to the point. END_OF_DOCUMENT_TOKEN_TO_BE_REPLACED

Going to be an interesting year again here in the Caucasus.

Russia will start building a naval base this year in Georgia’s Black Sea separatist region of Abkhazia, Russian media reported on Monday, a step Tbilisi said would violate its sovereignty. …

Russia’s Itar-Tass news agency quoted an unnamed official at Russian naval headquarters as saying commanders planned to station vessels at the Abkhaz port of Ochamchire. Russia’s navy could not immediately be reached for comment.

“The fundamental decision on creating a Black Sea Fleet base in Ochamchire has been taken,” Tass quoted the official as saying. “This year we will begin practical work, including dredging, along Abkhazia’s coast.”

This latest development comes despite comments made last year by Abkhazia’s leader that his territory would not be hosting Russian military bases.

“There will be no new bases,” Sergei Bagapsh told Russia’s Novosti news agency, adding that Russia’s Black Sea Fleet will not be based in the republic either.

“Only units of Russia’s ground forces that have always been based here will continue to be stationed in Abkhazia,” he said.

Don’t miss his links to other photo projects down at the bottom of the post. Russian North Truckers. Ain’t No Russian City. Another Abandoned Theater.

Wow everyone, I presume it is just a coincidence that my Czech Post went live yesterday, but gee, there’s nothing like being ahead of the curve, is there? Bloomberg is running this story this morning:

The Czech economy may fall into a recession this year as export demand weakens, Prime Minister Mirek Topolanek said, iHned reported. The expectation that the economy may shrink is one of two scenarios with which the government is working, the news Web site cited Topolanek as saying. The premier made the comments after yesterdayâ€™s first meeting of the governmentâ€™s National Economic Board, a panel of economic advisers. The Cabinet is preparing measures, including loan guarantees for selected industries and a reduction in payroll taxes, to boost investment, iDnes said.

I think I’m right in saying I was the first analyst out of the box on this one (although admittedly, the recession scenario is only one of two they have under consideration – but I do think it is the most realistic one, for the reasons I argue in the post). So last week I was leading the pack on China, this week on the CR, who knows where all this will now end…… (oh, and don’t forget Poland – and again Bloomberg this morning).

We’re about to find out whether the rest of the world is still dependent on demand in the US. If it is, better set those expectations down a bit further.

The U.S. economy contracted violently in the fourth quarter, with gross domestic product falling at its fastest pace in more than 25 years, economists said ahead of what promises to be a grim week of economic news. …

GDP is expected to have fallen at a 5.5% annualized rate in the final three months of last year, according to the median forecast of economists surveyed by MarketWatch. That would be the biggest decline since the 6.4% drop in early 1982 and one of the worst quarters in the post-World War II era.

The highly open Czech economy is set to slow down considerably, affected by the deteriorating outlook for its main trading partners. Although GDP growth was still solid in Q3 2008, both exports and imports growth slowed significantly. The global crisis is expected to adversely impact the real economy particularly from the fourth quarter of 2008. Overall, GDP is expected to have grown by 4.2% in 2008 with a strong contribution from the external balance.
EU Commission Forecast January 2009

Analysts and followers of the Czech economy are basically agreed on two things at the moment: that the Czech is slowing (and rapidly), and that the dependence on car exports is a real achilles heal at a time when a generalised credit crunch means that the financing which is needed for people to make car purchases often quite simply isn’t there. Beyond this point opinions differ. Some expect the slowdown to end in nothing more than a year of sub par growth, with a bounce-back recovery in H2 2009 (this is the view, for example, of Pasquale Diana at Morgan Stanley). Others take a more pessimistic view – like Danskebank’s Lars Christensen – and fear that not only may we see a substantial slowdown (bordering possibly on outright contraction) throughout the whole of 2009. but also that strong deflationary forces are at work, forces which may well lead the Czech National Bank to become one of the first European central banks (hand in hand possibly with the BoE) to get into the tricky area of trying to operate monetary policy near the zero bound. Personally, after a long hard stare at the detailed macro data, I am in the latter camp, and to answer the question I pose in the title of this post, I think the Czech economy is very near to its first quarter of contraction, indeed we may even have seen contraction in Q4 2008. If we didn’t it will be a very close call, since the not only has the trade impact been negative, and industrial output dropped like a stone, but domestic consumer demand – as reflected in retail sales – also seems to have been falling.

And the outlook for domestic demand certainly does not look any too positive, if the most recent consumer confidence readings are anything to go by, since these have been falling strongly since the summer, and surely suggest strong weakness in household consumption right across the first half of 2009, at the very least. 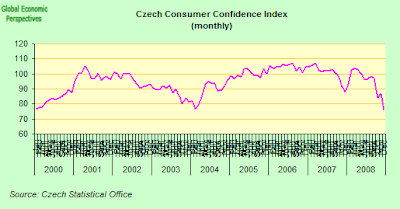 END_OF_DOCUMENT_TOKEN_TO_BE_REPLACED

This is a couple of days old, but it doesn’t seem to have gotten much attention.

It doesn’t come as much of a surprise, given Iceland’s devastating economic situation. It’s not clear, though, just what the precipitating incident was. As late as Wednesday, the Prime Minister was saying that he wouldn’t step down, no, sir, no way. Der Speigel mentions “violent protests”, but they don’t seem to have been all that violent; brief googling only shows stuff like “lighting a bonfire” and “clashing with police”.

Elections are set for May, and polls show that if they were held today the Prime Minister’s center-right Independence Party would take a beating, but would survive in opposition. The next government would be formed by Iceland’s Green Party — which has never been part of a government before.

More information from any of our Icelandic readers would be appreciated!