Ukrainian President Viktor Yushchenko speaking in the parliament yesterday (Tuesday) called for concerted action to reverse a drop of up to 30 percent in economic output which is in the process od destroying jobs and sinking living standards. Yushenko said the country was “ill-prepared to confront a crisis” which may have lead to a fall of 25-30 percent based on figures from January-February 2009. According to the Kyiv post:

The president urged politicians to end the rows which have thwarted reform efforts as Ukraine gears up for next year’s presidential election. He also proposed political change, including the creation of a second chamber of parliament. “We were ill-prepared to confront the crisis and its first blow was painful and difficult…,” Yushchenko told deputies.

“The consequence of this was a slowdown in GDP growth in 2008 to 2.1 percent…and a destructive fall of 25-30 percent according to figures from January-February 2009.”

“Before the crisis, (annual) growth rates in the Ukrainian economy stood at 6.5-7.0 percent. I believe, I am certain that this indicator will be restored,” the president said.

“We have lost our foreign markets and 60 percent of Ukrainian exports. All our foreign currency earnings depended on these markets as did the jobs of nearly two million people in steel, chemicals and related sectors.”

Well having just quoted Claus to the effect that Japan’s economy was occupying pole position in the global contraction, I would now readily have to “correct” and admit that Ukraine are obviously playing in another league, and even though all statistics in Ukraine are “political statistics”, looking at the sort of data I’ve been looking at, the order of magnitude seems about right. The contraction is massive. And even though Ihor Burakovsky’s earlier estimate of a 12% annual contraction for the year now looks to be a little dated, that was an annual (ie all 2009) forecast, and may not be that far from the mark by the time we reach the end of the year. So with that in mind, and taking into account that we have little in the way of really new data at this point, I am simply upgrading and reposting my earlier post, for those who may not have seen it.

Ihor Burakovsky, the director and board chairman of the Institute for Economic Research and Policy Consulting says that “experts” have forecast a 12% drop in Ukraine’s GDP in 2009 and an 18% inflation rate. I’m not sure who the experts in question are, but the number doesn’t seem unrealistic at all to me, given the data we are seeing. First some information from the Ukraine Statistics website.

During January-February 2009, indices of industrial products were 67.2% as compared with January-February 2008. This means there was a 32.8% drop in output year on year over the two months. In fact output was up slightly month on month (by 5.4%) in February, in part as a result of the demand for steel exports produced by the sharp Hyrvnia devaluation, and February output was “only” down by 31.6%, following January’s 34.1% annual fall, so you could say that things were getting better, but frankly, and at this stage of the game, such finesse is a little but lost on me. 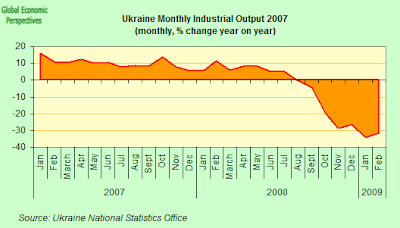 Construction output in January-February 2009 was just 42.7% of the level hit in the same period last year 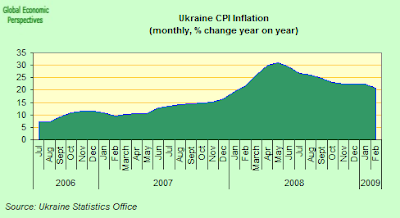 The unemployment rate (using the ILO methodology) for January-September 2008, on average, was 6,5% of economically active working age population. Unfortunately this is the most recent labour force survey data we have. Undoubtedly these numbers have increased significantly over the last 5 months.

In 2008, the Ukraine GDP was up 2.1% when compared with 2007, which means, if the so-called “experts” prediction is anywhere near right (and it doesn’t look that unrealistic) the GDP growth chart since 1993 will look something like this, which for a comparatively poor country struggling to catch up is little short of a disaster. 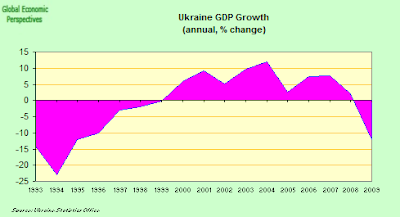 Ukrainian still has not received the second installment of a $16.4 billion loan from the International Monetary Fund although Ukrainian Prime Minister Yulia Timoshenko said last week that “she is confident” it will be agreed to.

One of the sticking points with the IMF had been the projected 2009 budget, but Ukraineâ€™s Parliament last week changed the 2009 state budget law to strengthen the central bankâ€™s independence, meeting one key IMF demand for getting the second installment of the loan (we will remember the Parliament was debating sending the governor to prison for allowing the currency to float, again another one of the key IMF demands). Lawmakers need to pass two more bills to qualify for the $1.9 billion installment of the IMF loan, which originally was expected on Feb. 15, according to Oleksandr Shlapak, the first deputy head of the presidentâ€™s staff, with the central bone of contention being the 5% budget deficit projected for 2009, and on a lot lower contraction forecast than the current “most realistic case” scenario.

Really looking at all this, what we have here is a country in total monetary, financial, and economic disarray, and this is before we even start to think about the demographic unwinding which lies ahead. No wonder Dominique Strauss Kahn recently warned of the catastrophe which looms before us. I seriously doubt any knows what to do about all this, I certainly don’t. Tear my hair out perhaps. But I already have precious little left.